It’s 1978 and a 13 year old me makes my monthly 3 mile walk with my friend Chris to our after-school film club. Even back then I was a cinephile and took every opportunity to watch whatever I could.

On this particular evening the film to be shown was Rocky.

Like all of the previous films that had been shown to that point (One Flew Over the Cuckoo’s Nest, Five Easy Pieces, Picnic at Hanging Rock), I knew nothing about it as we walked into the school hall ready for the evenings viewing.

A couple of hours later we walked out of the school grounds and my life was changed forever.

Now that may sound overly dramatic, but it is true.

My 1st memory of going to the cinema was to see Bedknobs and Broomsticks in 1971, but it was my dad taking me to see Jaws in early 1976 that truly began my obsession with film.

My dad was a huge Clint Eastwood fan and I grew up watching all of his movies, and I still love him today. But on that fateful evening, at an after-school film club, I found my cinematic hero…Sylvester Stallone.

From that day onwards I eagerly awaited every new film of his, which of course became a little easier for me when my dad became an early adopter of VHS and not only could we rent Sly’s films that had been released, but I could also record them off the television and watch them again…and again…and again.

As the years passed by I bought all of his films on VHS…then Laserdisc…then DVD…then Blu-ray…and am now buying on 4k Blu-ray. 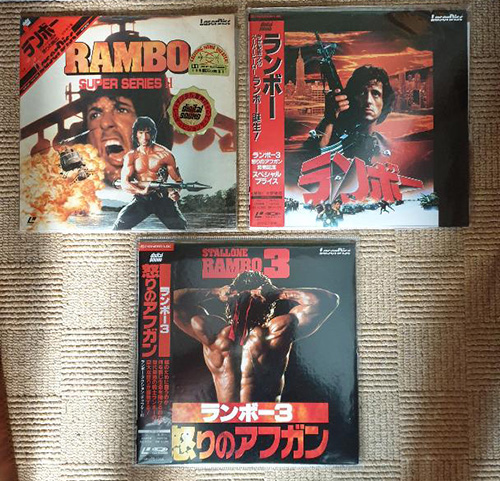 Yes, I am a film collector.

As well as the films, I also started collecting Stallone memorabilia, but even though it was the character of Rocky Balboa that first introduced me to Sylvester Stallone, it was the character of John Rambo that connected with me the most, and so my collection became heavily waited towards anything to do with him (see photo gallery below for a little of my Rambo collection).

With the release of Rambo in 2008, I figured that this would be my final time of seeing this iconic figure on the big screen, so I got a tattoo of the stencil art poster for the film to mark the occasion. 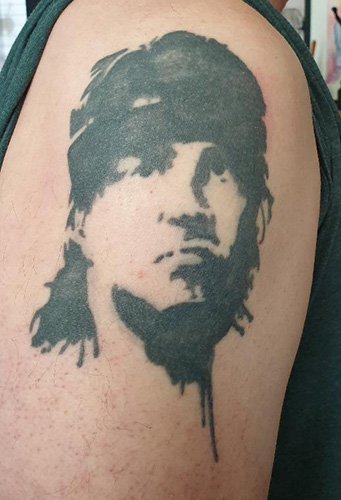 Four years later Sly and other cast members were attending the London premiere of The Expendables 2, and so I made plans with my fellow Decade of Decadence co-host Thom (this was back when we were hosting the 80’s Picturehouse podcast) to get there early and get a place at the front of the barriers and a chance (however slim it may be) of saying hello to Sly and hopefully getting him to sign my Rambo tattoo so that I could then have it gone over as a tattoo.

The story of what happened was well documented on an episode of 80’s Picturehouse, but in a nutshell…I was left in despair.

After the long journey from North Wales to London, and then an even longer wait at the front of the barriers to make sure that we got a good view, myself and Thom were separated by about 10 feet as the crowd began to swell with new people squeezing into the space between the cinema and the barriers as it became less than an hour until Sly and everyone else arrived.

A couple of these people were especially ignorant of those around them and were pushing people out of the way to get to the front, and it was when they pushed a young girl out of the way (who I’d let stand in front of me as she was about 1 foot shorter and I wanted her and her partner to have a good view…I could still easily see over her) that I wanted justice done.

I asked them to move and said that the young couple and myself had been stood for many hours waiting to see Sly. They ignored me.

I politely asked them again to move as they were blocking the view of everyone who had been patiently waiting…they were both over 6ft.

This time they didn’t ignore me but started telling me that they would stand wherever they wanted too.

As much as I would have loved to have channelled John Rambo at that point and dealt with them that way, I once again stood my ground and said that they should move back.

This began a screaming fit from one of the other people who were with them but hadn’t yet managed to push themselves to the front. They screamed at the security people that I was attacking their friends!

Despite the protests of everyone around us that this was indeed a blatant lie, security manhandled me out of the area, LEAVING THE 2 GUYS STILL THERE IN PRIME POSITION AND LAUGHING.

Security pushed me not just out of the barricaded area at the front of the cinema, but right out of the exterior cordoned off area around Leicester Square.

I protested my innocence and told them exactly what had happened, but they weren’t having any of it, and so I was left stood there alone, so far away that I didn’t even get to see Sly when he arrived…never mind the chance of saying hello to him and getting my tattoo signed.

Needless to say, I was absolutely gutted.

Complaint letters were written and the cinema were very good about it. They said an external security firm were used and so they couldn’t do anything about that, but they did send me a couple of EX2 posters (1 signed by JCVD and 1 by Terry Crews). As well as an EX2 bottle opener and t-shirt.

I’d have much rather have seen Sly though.

Jump forward to January 2014 and ‘An Audience With Sylvester Stallone’ was happening in London.

There was no way that I could afford the ‘meet and greet’ at the event, as travel/hotel/ticket was still more than I really should have been spending…but it was my chance to finally see Sly ‘in the flesh’ after my heartbreaking experience 2 years previously.

So I’ve now seen him and got to listen to some of his stories at an evening that I’ll never forget.

It’s now July 25th 2015, and after years of saving for this landmark birthday (my 50th) I’m running up the ‘Rocky steps’ in Philadelphia after having an amazing Rocky Tour with Mike Kunda (please listen to our shows with him and take his tour whenever you’re in Philly) and then going to the Victor Café (‘Adrian’s’ in Rocky Balboa and the Creed movies) for a birthday meal.

This is it then…the pinnacle of me being a Sly fan since 1978. Surely it can’t get any better?

Jump forward to 2017 and a tattooist who does incredible portrait tattoos (Grindhouse Tattoo Productions) suddenly posts online that he has a cancellation for the next day and will do the full day at a knockdown price if you choose one of the photos that he would love to tattoo onto somebody.

One of those photos was from Rambo II.

After looking at Tina, who said a Rocky inspired line of ‘Go for it”, I found myself the next day sat having a 2nd Rambo tattoo put onto my arm. 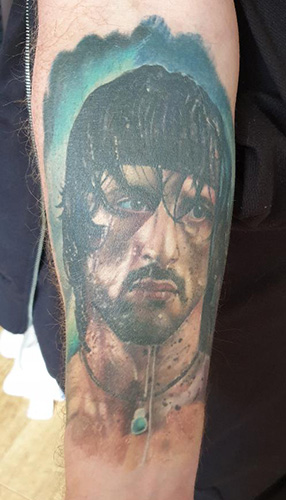 We’re now in 2019 and the folks over at ‘An Experience With’ announce that Sly is returning to the UK for a couple of dates (later expanded to 3) in support of the release of Rambo: Last Blood.

Yes, another Rambo film for me to make multiple trips to the cinema to watch…and here I was thinking that I’d never see John Rambo back on the big screen.

With Sly now 73 (and looking better than I’ve ever done) could this be the final Rambo film? Could this be the last Q&A he’ll do in the UK? As with everything Sly does though, never count him out of anything happening!

So…I melted my credit card and bought a VIP ticket, so that not only would I get a good seat for the Q&A, I’ll also have a photo with him and finally meet him after having my hopes and dreams crushed back at Leicester Square in 2012.

Saturday September 7th 2019. That’s when I’ll be in Birmingham and a dream will come true.

The big question is this…

To have something signed by Sly you needed to buy a Platinum ticket.

Buying a VIP ticket completely melted my credit card, and there is no way I could have bought a Platinum ticket without selling internal organs…and at my age I need them all.

I completely understand that when you go to have your photo taken with Sly that it is a fairly rushed ‘meet and greet’, which usually means a quick handshake and hello, followed by the photo taken and then you’re moved on. Which of course means no time for autographs…plus a lot of people get something autographed only to then sell on Ebay.

However, if I have my shirt sleeve already rolled up and a sharpie at the ready, do you think that Sly would sign my Rambo II tattoo?

I promise I won’t sell my arm on Ebay.

So my 1 shot at achieving my dream is coming true and I’m finally going to meet Sly.

Could I get the knockout and get my tattoo signed?

You’ll hear the full story of the event when myself and Thom record the September Decade of Decadence show.