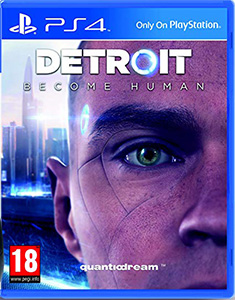 This is not a full review as I’m still playing through the game. It’s more a first impression of the game.

Detroit Become Human is the latest game from Quantic Dreams, and after their previous games, I think they have finally got it spot on.

The game is centred around three playable characters. All three are androids and they all have totally different back stories:

Connor: A police investigator who is responsible for taking down malfunctioning androids.

Markus: He gains consciousness and takes it upon himself to free others like him.

Kara: A housekeeper who also develops artificial consciousness and takes on the responsibility for a young girl’s safety.

Before I go into the story lets cover the following:

Sound: It has some of the best sound in a game I’ve experienced since Senua’s Sacrifice.

Controls: Finally Quantic Dreams nailed the controls and they are seamless. The responsiveness is spot on.

Fahrenheit [Indigo Prophecy in North America]: I Only got so far and got bored. The controls on the PS 2 were less than perfect.

Heavy Rain: I managed to finish one play through of this game. At the time is was an awesome game on the PS3. I even managed to purchase the remastered version on the PS 4, but I haven’t gotten around to playing it again.

Beyond Two Souls: This game was intriguing and yes I did manage to play through the game once. It was free on PS Plus when I had Plus. It got a bit tedious towards the end but still a good game.

I’ve heard good things from this latest iteration, so I was looking forward to playing it and I finally got around to starting the game last week.

The game starts with Connor, in a hostage negotiation situation. You search for clues in an apartment, and once you have all the clues necessary you approach an android, who has basically lost it.

That’s all you will get from me on this scenario, no spoilers from me.

The game switches between playable characters. The game play is seamless and much better than the previous games from this developer. I’ve had some real gut wrenching situations playing through this game it’s got its hooks into me.

The music is awesome, it looks beautiful and as I’ve mentioned already controls are spot on.

I would recommend it and you can pick it up for around £20.

I’m Colm, co-host of LastSaveLoaded and been podcasting since 2015. I love Clint Eastwood (yes Dave, even more than Sly) especially the Sergio Leone movies. Still gaming (since Pong), watching movies and listening to all kinds of music. If I had to chose between the 3, music would win every time for me. I'm the old, new guy on the block. I'll stick around for the reviews, if Dave and the team want me around.
Review: The Running Man Review: Lolita