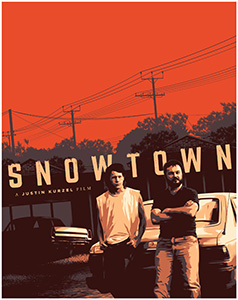 Snowtown (A.K.A. The Snowtown Murders) is based on the true horrific events that happened in Australia during the 1990’s and which led to the arrest and imprisonment of various people, including John Bunting and Robert Wagner (both of whom will spend the rest of their lives in jail), and also James (Jamie) Vlassakis, who is due for a parole hearing in 2025.

Snowtown is not an easy watch, and while a previous viewing many years ago had already prepared me for what was to come, rewatching it on this new blu-ray release from 101 Films still shocked me to the core…testament to what a powerful movie this is.

16 year old Jamie lives with his mother and brothers, all of them barely getting by with little money and even less hope for the future.

Jamie and his brothers are sexually abused by their mothers current lover who lives across the road from them, and when John Bunting steps in and “puts him straight about a few things”, Bunting then becomes a part of the family unit.

Far from creating a safe environment, Bunting’s presence in the home is the catalyst for an escalation of events that ultimately leads to the downfall (and worse) of all those involved.

Daniel Henshall is electrifying as John Bunting, oozing a calm evil that permeates through the screen and makes you feel uncomfortable despite being in the safety of your own home. His slow and considered demeanour burning like a slow fuse until it inevitably reaches exploding point…and woe betide whoever is around him when that happens.

For the most part of the movie Bunting is with his young protegé Jamie (Lucas Pittaway), and the dynamics between them keep you ever on the edge of your seat.

Pittaway was picked off the streets with no prior acting experience, yet despite this he is completely believable as a young man trying to find sense in a world that seemingly has tossed him to one side, playing with your emotions for his character as he transforms from being a sexual abuse victim, through to him becoming complicit in the torture and killing of those whom Bunting deems unworthy of living.

Scenes of rape are never pleasant viewing, and while not quite as uncomfortable to watch as the one in Irreversible, the scene in which Jamie’s older brother forces him to the floor and has his way with him still makes my blood run cold. As do the scenes involving any sort of violence (simulated or not) towards animals, of which this contains a couple that I find very difficult to stop myself averting my eyes from the screen.

I point out the above as just a few instances where viewers could get either offended, uncomfortable, or both. This is a movie where you feel that you need a long shower after watching it.

However, it is also a brilliant piece of filmmaking and a powerful 2 hours of viewing that will live long with you after you’ve finished watching.

Director and co-writer Justin Kurzel does an incredible job of immersing you into the grimy world in which the characters live, letting the actors improvise the majority of their lines while making sure that the main narrative beats are still hit correctly, all while keeping the camera moving around as though you are a fly on the wall watching proceedings, never wanting to land and stay still for too long, as everything in front of you is too grubby and dirty even for a fly to want to stay too long in its presence.

Snowtown isn’t a movie you’ll pull out and watch every Christmas with the family, but it is a movie that you can reach for as an example of how great movies can be at affecting you. All while appreciating the work by everyone involved.

This appreciation is heightened by some fascinating special features, including a commentary track with Justin Kurzel that answered a lot of the questions that popped into my head while watching the feature presentation. As did the 2nd commentary track with film critics Alexandra Heller-Nicholas and Josh Nelson, along with an interview with Lucas Pittaway.

This release is #24 in 101 Films ‘Black Label‘ series of releases, and they very kindly sent me a retail version for review, of which the eye-catching rigid slipcase immediately showcases new artwork by Thomas Walker, the blood red sky foreshadowing the claret you’ll see spilled once pressing play on the enclosed disc.

A limited edition 28 page booklet features ‘Violence in the Suburbs’ by Thomas Caldwell and ‘Raw Horror: Social Realism in Snowtown’ by Martyn Conterio. Both are engrossing reads and perfectly compliment the commentaries and interviews on the digital special features, while also containing some atmospheric images from the movie too.

If you haven’t already bought any of 101 Films ‘Black Label’ releases, then this is a great title to start your collection with, and of course if you are already collecting them you’ll know the quality of everything involved and will hopefully have already placed your order.

An uncompromising, unflinching, highly provocative movie watching experience that will have you debating with your fellow movie loving friends long after the final credits have rolled.