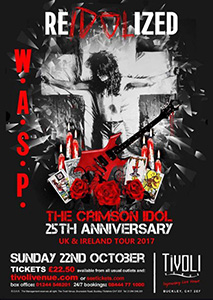 The above words are ones that I never thought I’d hear Blackie Lawless of W.A.S.P. shout at the Tivoli. Thankfully I was there when he did. And so were many others at a sold out Tiv.

Celebrating the 25th anniversary of The Crimson Idol (a conceptual album which tells the story of Jonathan Steel, a teenager who thinks becoming a rock star will cure all his problems, yet it is the love of his family that he really seeks) W.A.S.P. are touring playing the album in full. An absolute treat for all the fans.

The doors to the Tivoli opened at 7pm ready for an 8:30pm start and the queue was already snaking down the road when I arrived there at 7:05pm. What a glorious sight to see the main road in Buckley filled with rockers waiting to get into my all time favourite music venue.

The atmosphere inside was electric from the very beginning as everyone made a beeline to the merchandise stall to check out which t-shirt(s) to buy, and to the bar for some much needed refreshments ready for the sweaty evening that lay ahead. I was spoilt for choice on which t-shirt to get and settled on a great ‘Re-Idolized’ shirt which complemented my ‘Chainsaw Charlie’ t-shirt that I was wearing.

I’ve been a fan of W.A.S.P. since the release of their 1st album in 1984, and have seen them on most UK tours from ‘The Last Command‘ onwards. The fact that I can still get to see the band in 2017 AND at the Tivoli makes me very happy indeed.

The Tivoli stage was filled with 2 video screens which were placed either side of one of the biggest drum kits I’ve seen there. This was a kit which took me back to 80’s rock bands and all the bombastic, good time songs that were played in that most decadent of decades.

The narrative of The Crimson Idol however is not a ‘good time’, as it follows Jonathan’s rise as a rock star, and then his ultimate demise. The songs that tell the story though are rock of the highest order. Blackie (who let’s face it, IS W.A.S.P. and has been for many years due to numerous band member changes over the years) possesses one of THE rock voices, and one which accompanies Paul Stanley, Rob Halford, Klaus Meine, David Coverdale and Dee Snider as a distinctive rock vocalist who sang the songs of my youth…and continue to blast out songs that accompany my ‘not so young’ years. 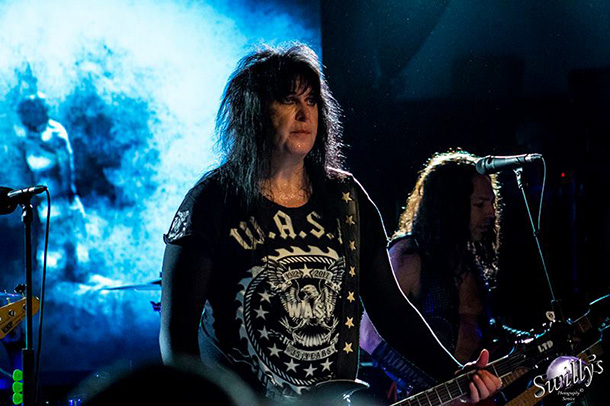 The video screens light up and the single guitar begins to play as Blackie soulfully sings the intro to ‘The Titanic Overture’, then the huge drum kit is pounded as the song builds up and the fists from those in the crowd are thrown into the air in unison. The atmosphere continues to boil as ‘The Invisible Boy’ and ‘Arena of Pleasure’ are blasted out from the Tivoli speakers as Blackie remains enigmatic onstage, often turning to face the screens when the instrumental parts of the songs are played.

It is ‘Chainsaw Charlie (Murders in the Rue Morgue)’ when Blackie finally fully acknowledges the sweaty horde in front of him. Needing no encouragement from the main man however, all attending once more threw up their fists and sang as loud as they possibly could to the chorus, letting the band stand back and admire the vocal talents of the Tivoli faithful.

The atmosphere was incredible throughout the entire set of The Crimson Idol, and what an absolute pleasure to hear it played out in its entirety.

The night was not over though, and after a 5 minute break, the band returned to the stage for 4 more songs. As each song was played the crowd got ever more louder than they were before. L.O.V.E. Machine had the place going wild, yet this was STILL not the peak of the evening. Like any good performer, Blackie held back on the money shot (money song?) until the very end. ‘I Wanna Be Somebody’ closed off the evening in spectacular fashion and it’s a wonder that the entire Tivoli building didn’t bounce down Buckley high street with all inside jumping up and down and singing along as though their lives depended on it.

As regular visitors to our website (and listeners of our podcast) already know, I’ve been attending gigs at the Tivoli for 30+ years. This definitely ranks up there with ones that will forever be etched in my memory.

Once again a HUGE thank you to Roki and Kirsty whose hard work and perseverance keeps the Tiv as THE venue to go to.

Review by Dave (host of 60 Minutes With) with thanks as always to Roki and Kirsty.