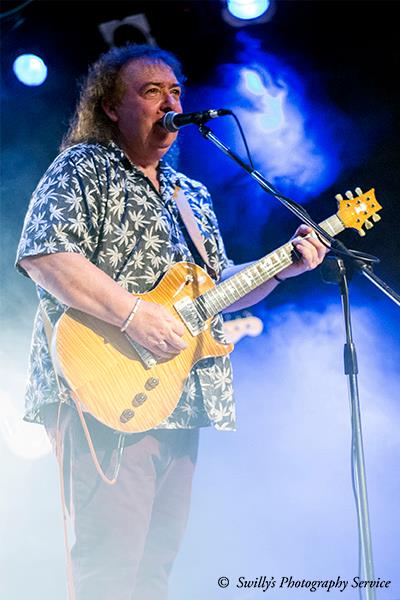 There are times in everyone’s life when the stars align and everything is just perfect. Last night at our beloved Tivoli here in North Wales was one of those times.

After a 2017 plagued by ill health, I hadn’t been able to visit my favourite gig venue of the past 35+ years for far too long. However, still smiling from my Soundcheck show with Bernie Marsden just a few days previous, my spirits were raised considerably when myself and Tina stepped back into the Tiv.

Bernie was already at the merchandise stand, happily taking photos with everyone and signing CD’s, his new book and much more. I went across to him and was greeted with a warm smile and a handshake as I thanked him for his time with me on the podcast. We had some photo’s and he signed my Come an’ Get it and Look at Me Now albums, but…more on that later.

The support band was The Hexmen, a band that I’ll admit I wasn’t familiar with before the gig, but at the end of the night I was buying their CD. Fronted by vocalist and harmonica playing George Hexman, they are an energetic blues band who certainly know how to deliver a great gig and involve the crowd. Talented musicians throughout, and lead by the passion filled voice of George, this is a band who now have 1 more very enthusiastic fan.

Then it was time for Bernie and his band to take to the stage.

In a non too auspicious start to the show, Bernie was flummoxed as to why he couldn’t hear his guitar. With a cry of ‘plug it in‘ from the gathered crowd, the requisite lead was then plugged in with with a comment from Bernie saying “I used to have people running around on stage doing all this for me“…cue lots of laughter from everyone. And thereby lies one of the great character traits of Bernie that has made me a fan of his for 35+ years now, his self-effacing attitude and fantastic sense of humour shine through his personality and you can’t help but love the guy.

He enthralled us all with between song chats related to certain songs he was singing and people he had met. Each one eliciting laughs and applause as he shared some great memories with us of his amazing career so far. But it is of course the music that we all went for, and it is the music that kept playing in our heads long after we had left the venue and were making our way home.

An accomplished songwriter who is responsible for probably more songs you’ve ever sung along to than you realise, Bernie is also a quintessential guitarist who can make his instrument sing, cry, shout, and elict an emotional response from everyone listening with his heartfelt playing. This is a guy if you ever get the chance to attended a guitar school with, make sure that you do as you will be hard pushed to find better.

He is also a very soulful vocalist and sings the old Whitesnake songs far better than David Coverdale does these days. Bernie, as he mentioned on the Soundcheck show, is fully aware that the majority of people are at his his gig because of the Whitesnake connection (PROPER Whitesnake, not the cock rock band that shed its rhythm and blues skin for sequins and sparkle) and when some of those songs are played I have to admit that goosebumps appeared and the hairs on the back of my neck were raised. Walking in the Shadow of the Blues and Fool For Your Lovin’ went down a storm, but it was Ain’t No Love in the Heart of the City that truly got all assembled singing along and raising their arms, which was a fantastic warmup to the end of show Here I Go Again. A song which had everyone singing even louder than ever to what is probably Bernie’s most well known song. Kudos to everyone that sang the original lyrics of “An’ here I go again on my own. Goin’ down the only road I’ve ever known. Like a hobo I was born to walk alone” and not the changed “drifter” from the re-recorded version on the 1987 album.
It may well be the Whitesnake connection that pulls you in, but it is the solo songs and cover versions of songs which drop your jaw and have you shouting and applauding wildly after each one. Bernie has written some amazing solo songs that deserve to be discovered by a far bigger audience and loved just as much as the older Whitesnake material. Each song was full of passion and you couldn’t help but to be drawn in to each perfectly played note of them as Bernie and the band gave a masterclass on musicianship and entertaining an audience.

The 16 year old me who attended his 1st ever gig back in 1981, when Whitesnake played Deeside on their Come an’ Get It tour, would probably have done a little excited wee if you’d told him that he would one day get to record an interview show with Bernie Marsden (ALWAYS my favourite member of Whitesnake) and then get to meet him. Thankfully, despite my advancing years, I managed to keep my pants dry.

Some may accuse this review of being biased due to my love of the guy, but I would reply that MANY times I have been disappointed by people I have admired for a long time. My previous experience and expectations of them always sets the bar very high, and quite a lot can no longer attain those musical highs that I once loved. Bernie however continues to impress me as a guitar player, a songwriter, a vocalist, and above all else, I can now emphatically say that he is also a true gentleman and a lovely guy to know.

Thanks for all the songs and memories so far Bernie and here’s to many more.

Review by Dave (host of 60 Minutes With) with thanks as always to the awesome Roki and Kirsty from the Tivoli. 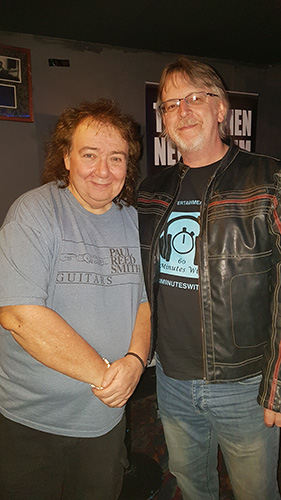 Review: Dr Rubberfunk – My Life at 45

Review: The Haggis Horns – Stand Up For Love

Review: The Teskey Brothers – Live at the Forum