Once again I headed back to my longest serving and favourite music venue; The Tivoli in Buckley. This time I was accompanied by Tina who hadn’t been there in 25 years! We’ve often discussed about the amount of times we were both at the same gig there in the 1980’s but didn’t cross paths, so it was very nice for us both to have our first visit there together. A special mention has to go out to Roki and Kirsty who went out of their way to make sure that Tina had a seat and a great view for the evening, we love you both, thank you.

We arrived a little later than planned (thank you Welsh roadworks!) and only got to see the last 3-4 songs by I.C.O.N. but what we saw we really enjoyed. Despite the Tivoli crowd still coming in and most people frequenting the bar getting drinks and chatting with rocker friends both old and new, the band gave it their all and are definitely a band to keep an eye (and both ears) on. 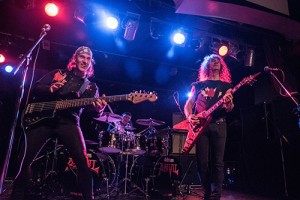 2nd on the bill were Canadian band Anvil. Formed in 1978 they have been widely recognised as being influences on Megadeth, Slayer, Anthrax and Metallica (plus many more) but never got to reach the commercial heights that those bands achieved. Despite never truly breaking the worldwide market as they would have hoped (or indeed, deserved) they have kept gigging and entertaining crowds worldwide.

Steve ‘Lips” Kudlow immediately made his way into the middle of the Tivoli throng for an extended guitar intro, all the while surrounded by beaming faces as they took photo’s and air-guitared alongside him. What a way to get the crowd cheering right from the start!

Backed up by longtime band member and personal friend Robb Reiner (drums) and Chris Robertson (bass), Steve had a smile on his face as he made his way back to the stage and the band kicked into a high energy set that raised fists and smiles in equal measure. 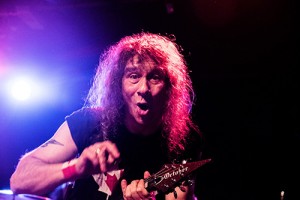 Now I’ve been to MANY rock gigs since I lost my ‘gig virginity’ in 1981 (Billy Squier and Whitesnake at Deeside Leisure centre if you must know) and I’ve seen all sorts of stage antics going on, from smoking and rocket firing guitars, a dwarf being hung, knuckles shredded on a cheese grater, plus much more, but I had never seen a guitar being played with a vibrator…until this evening. Using the vibrator as a guitar pick, Steve rocked out a great solo which was especially amazing when he used the various speeds of aforementioned sex toy to create different tones. The crowd, and the instrument, were buzzing.

If you’ve never heard Anvil before then please give them a listen, and even if you don’t like their music then I can highly recommended the documentary Anvil: The Story of Anvil for you to watch (which Robb Reiner kindly signed my DVD for me on the night). You’ll have a new found appreciation for the band despite what your musical tastes are. 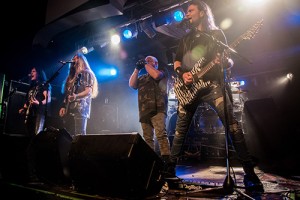 The headline act was Udo Dirkschneider who was the vocalist for Accept until 1987 when he founded his solo project U.D.O. Prolific in both recording and touring, Udo has been a mainstay of metal across 5 decades.

This tour is a special one as it is the final time that he will be doing a set entirely comprised of Accept songs. Until now he’s mixed the set with Accept and solo material, so this was a special event for all Udo fans.

At 64 years of age he can still belt out the songs with all the power and ferocity of a man half his age. Granted he is not the most svelte of frontmen, but he never has been and it in no way affects his performance. Hell, I’m about 2 stone heavier than I should be and there’s no way that I could go through a set like he does without the help of 2 tanks of oxygen and a quick nap halfway through. 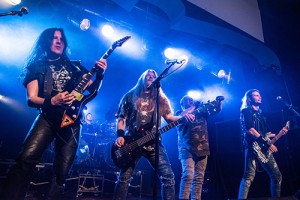 ‘Son of a Bitch’, ‘Helldriver’, ‘Monsterman’, each classic had the crowd getting increasingly louder and more frenzied. By the time ‘Fast as a Shark’ and ‘Balls to the Wall’ were played, it’s a wonder the roof wasn’t lifted off the place.

Udo has surrounded himself with some superb musicians and the band were as tight as Udo’s lycra pants were when I saw him in the 1980’s…and they were eye watering tight back then! Choreographed moves were interspersed with off the cuff moves, comments and plenty of smiles. In fact, I’d go so far as to say that across all 3 bands, I’d never seen so many band members smiling onstage and thoroughly enjoying what they do.

Support live music venues, support bands and get yourself to a gig as soon as you can, it’s always good to have a smile put on your face. Please like the Tivoli Facebook page and follow them on Twitter for all the latest news: @Tivoli_Venue

Review by Dave (host of 60 Minutes With). Photos ©2016 and kindly supplied by www.chestertonphotography.co.uk

Review: The Allergies – Say the Word