Arielle announces her ninth album ‘Analog Girl In A Digital World’ released Friday 7th May 2021. The album is now available to pre-order on CD, vinyl and digital

The album features Arielle’s self-built guitar Two-Tone, and her new signature guitar The Arielle. The latter is released by Brian May Guitars in March 2021. Arielle will plant a tone-wood tree in honour of the first 24 guitars sold. Pre-order the signature guitar HERE. 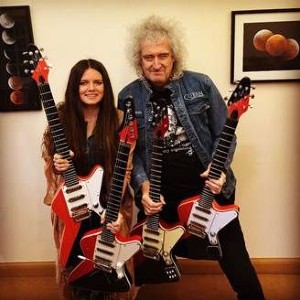 “This is the very first guitar that Brian May guitars has ever offered that is not based on my original Red Special,” says Brian May. “Designed by, and named after Arielle, it’s a new dimension. To understand why this guitar was irresistible to me, you have to hold her in your hands. The guitar is light, smooth and agile. She sings like a bird.”

Watch the trailer for the new single “Peace Of Mind” below.

Arielle is a 21st century classic rock artist who recorded half of the new album in digital, and the other half in tape, to try and capture the impact music of the 60’s and 70’s had on her.

As a writer, guitarist, and singer, when Arielle produced this album, she insisted on recording each song in one take. Recording the  album in studios in Nashville and Austin, Texas, Arielle set out to capture the  energy of each city and their musicians.

Continues Brian, “Arielle is an awesome musician. She is a truly phenomenal player, with an ability to produce the most beautiful tones as well technical mastery. Of course, it is in the fingers, but I was keen to discover how she had fashioned her own instrument to achieve
her sound. We collaborated in making the Arielle a new mission to guitarists everywhere – to open up a new  door to excellence!”

“Arielle’s playing reaches places I never knew existed,” says Brian. “I believe this guitar will do the same.”

Arielle is a young woman who was born  in the wrong generation. At times facing depression in being a child of the new  millennium versus the boom of musically creativity that emerged in the Sixties and thrived through the Seventies. And on a broader basis, a time even earlier where things were done by hand, with a level of craft that could not be hidden behind technology.

“I take and protect those principles inside my music,” says Arielle. The new  album takes you on a journey through the trials, tribulations, and confusion of  an old-school artist in a fast-paced world.