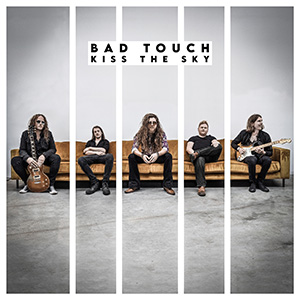 New Wave of Classic Rock favourites Bad Touch new studio album “ Kiss the Sky” released by Marshall Records on Friday 19 June 2020. To celebrate the release date, the band will release their new single, which is a a cover of Kiki Dee’s “ I’ve Got the Music In Me” the same day. The album can be ordered from https://fanlink.to/badtouch.
The new album will be released on CD, white vinyl, and digital download. “I’ve Got the Music In Me” is going to be the soundtrack for the summer, especially during these challenging times.
“The original version of ‘I’ve Got The Music In Me’ was a ballsy, uptempo stomper, but now the Norfolk quintet have taken this and turbocharged it into a sexed up and souped-up blast of raw power and all out fun.” – Metal Planet Music

“ I’ve Got the Music in Me a cover of the song originally recorded by the Kiki Dee Band is a nice rocked up take on the 70’s classic that Bad Touch make their own.” – The Rockpit
Bad Touch’s highly anticipated fourth studio album “ Kiss The Sky” was recorded, produced and mixed by Nick Brine at the legendary Rockfield Studios in Monmouth, Wales. The album was mastered by Pete Maher.

“ We’re so excited about this recording,” says lead singer Stevie Westwood. “ Just to record our songs in such a legendary place as Rockfield was a real buzz. I know it’s a cliché but, in our humble opinion, this is our most exciting recording to date, and we can’t wait to get it out there in front of a crowd.“
“ Kiss The Sky” is a no-nonsense rock and roll album at heart. For their fourth album, Bad Touch have stripped everything right back and looked at what the essence of what makes a great album and at the core, great songs. They’ve stuck to what they do best, which is writing catchy, feel good rock music.

The songs were initially written in their practice studio “The Cabin” in Norfolk where the band feels most comfortable and can focus on the songs without outside world interference. The band have really nailed their sound on this album. When you turn it on you will instantly know it’s Bad Touch.
The production side of the album is about capturing the performance within the band themselves and capturing the “moment” and energy the band produce during their live shows. More plugging straight in, turning everything to 10 and going for it.

” It’s always hard to recreate the live energy created during a show in the studio, but this time I really think we’ve nailed it,” says Bad Touch’s guitarist Robert Glendinning.
Continues Glendinning, “ We chose Rockfield Studios one obviously for its legendary reputation but two because it’s just like being at home. It’s what we know, being in the countryside and where I feel we are all inspired .”

“ Kiss the Sky” is a power-packed album that has the groove with huge chorus hooks, foot stomping guitar riffs and an abundance of energy overflowing within each track. If you want to see what all the fuss is about catch Bad Touch on tour throughout April 2021.
“ Bad Touch live for being on the road,” adds Westwood. “ There’s nothing we love more than giving people an escape from the trials of life and playing our brand of feel-good rock and roll for the soul..”

“ As a unit, we plan on hitting the UK hard with regards touring and festivals,” says Westwood. “W e were very lucky to do more in Europe throughout 2019, and we hope to continue that trend into this year as well. We’ve got a couple of things in the pipeline, and we are beyond ecstatic to be opening the main stage at Ramblin’ Man Fair. It’s one of our favorite UK festivals, and to think that they’ve put us on the main stage alongside giants like Clutch and Monster Truck is so cool.” 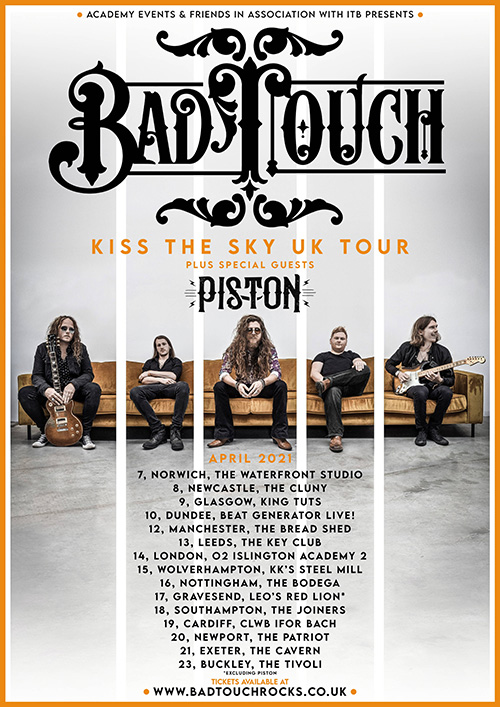 Come A Little Closer
It’s an instant guitar riff. That’s how you start a Bad Touch song. It’s possibly one of the more energetic, slightly frantic songs on the new album. It’s a homage to our bluesy roots. Non-stop fun from start to finish.

I Get High
Mum – it’s not what you think! Gratuitous love song incoming! It’s about that feeling we’ve all had at some point, being completely smitten by a lover and wanting to spend the rest of your life with that special person. And with a couple of Bad Touch members with rings on their fingers, it seems quite fitting to have a song like this on the new album.

Let Go
This song’s all about the groove. It’s chilled-out but still in your face. It was one of the first songs we wrote and sets out the overall vibe and feel for the album. We wanted this album to be full of huge choruses that you can shout along to. It’s also one of the only songs that we’ve played live before we recorded the album. Audiences were singing along by the end, so that makes it a winner in our book.

Strut
This is the first single taken from the new album. It sums up what we want from you at our live shows. “We wanna see you strut. Wanna see you get down!” It’s got a huge harmony in the chorus as a nod to our Southern gospel influences. Again, I know I keep saying it’s one of my favourite songs, but that’s because they all are! This album is the best that Bad Touch have recorded, and never have we been more fired-up about performing the new songs live for our fans.

I’ve Got The Music In Me
That’s right we’ve got a cover on our album. What? It’s a banger! We took what Kiki Dee was going for, and we amped it up, threw it in the dirt and gave it a whole lot more sex. I challenge anyone to listen to our version of this great song and not be smiling from ear to ear. They’ll be screaming the chorus to the heavens by the end!

Can You Save Me
This is one of those songs that hits hard in more ways than just relying on a big guitar sound. it’s about feeling unfulfilled, underwhelmed and genuinely disappointed in yourself. What could I have done different? Why am I like this? Listen to the lyrics and you’ll understand. It does feature a killer harmony by our voice-from-the-back, from our drummer, George.

Kiss The Sky
This song is big. It’s in your face It’s got groove It’s everything we wanted this album to be. That’s why we named her after it! “Kiss The Sky” is a party song (and a party album for that matter!) There’s no messing around. “You want it, you got it! I wanna see you move ‘til you can’t no more!”

See You Again
This is one of the more poignant songs on the new album. It’s a from-the-heart ballad, about the loss of a friend to all the band, but a father to one member of the band. It was one of the harder songs to write as it was so personal, and it sucks to see your mate struggle. It very nearly never made it on the album. It was our producer, Nick Brine, that said, “Boys, it’s gotta be on the album” and I, for one, am glad we pushed on. This one’s for you Joe.

Before I Die
The initial idea for this song came about whilst messing around with a loop pedal. It’s got a different vibe to the usual Bad Touch thing and is one of my personal favourites on the new album. It was inspired by tracks like the Temperance Movement’s “Oh Lorraine” and Whitesnake’s “Ready An’ Willing”. We went for a funkier, gnarlier sound with biting lyrics and heavy groove.

Read All About It
The song features an awesome bit of guitar-work by our resident face-melter, Rob Glendinning. This track has a lot of groove and emotion. It’s about breaking free from something toxic that’s controlled your life, whether that be substances or a bad relationship. The message is, “If you have enough support and enough love, you’ll come out the other side.” We all make mistakes people, but you’ll always find a friend in us.

Too Much of A Good Thing
I hope you’re ready to sing the chorus… ‘coz you will! This is another upbeat Bad Touch song. It’s not going to redefine rock and roll, but I think the overall sentiment is there. Its 2 minutes and 47 seconds of non-stop feel-good music.

Sun And The Moon
As a band, this one’s probably our favourite song to play. Influenced by our brothers in Magpie Salute and The Black Crowes, it touches on what it’s like being a young(ish) person today. It’s calling everyone to look upon our world and pull together. Bad Touch don’t do political stances, but we do believe that as people, if we stand together, we can achieve anything we want to.

*Something About Your Kiss
This is a real step outside of Bad Touch’s comfort zone. With the help of the man with the magic fingers, our producer, Nick Brine, I think we’ve created something special. Influenced by songs like “Seagull” by Bad Company, this song has a real spooky, folk, Fleetwood Mac vibe. We love it. Get ready for a big guitar solo… that’s all I’m saying.