It was fantastic chatting with Jansen Press from Carousel Vertigo in a Soundcheck interview show, and now they are coming to the UK.

Rock is dead, long live rock!
It’s been said before and will be said again.  The truth is that rock music is and always will be here to stay, especially when a band like Carousel Vertigo creates, feels and plays it like it does.
Riding high on unanimously stellar reviews in France, of both its new album and recent live shows, Parisian rockers Carousel Vertigo will be touring the UK during March 2018 and promise “Ia hi-energy rock & roll show with 70s rock overtones”
Carousel Vertigo play the best music you haven’t heard yet but already love. The short headlining tour of intimate venues will support the release of the title track from the band’s classic second album, ‘Revenge of Rock and Roll’. (an album that was in my ‘Top 3 of 2017″…Dave) 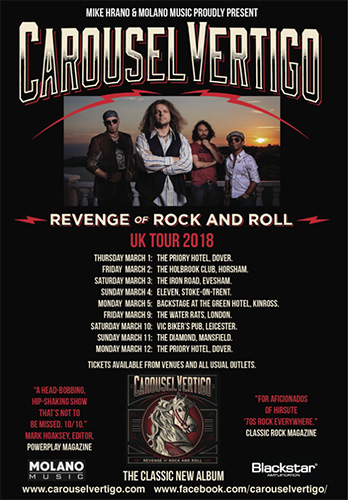 Tickets are available from  www.carouselvertigo.com