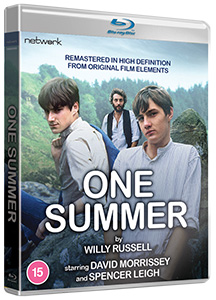 To celebrate the HD restoration of this iconic series and help raise funds for the Liverpool Everyman and Playhouse Theatres a special reunion will take place on Thursday 19th November at 7:30pm GMT as writer, broadcaster and cultural historian Matthew Sweet will be joined by actors David Morrissey and Spencer Leigh live online to discuss their experience on this ground-breaking series.

This 1983 hard-hitting series from award-winning dramatist Willy Russell saw David Morrissey and Spencer Leigh play two directionless teenagers, Billy and Icky, who pin their hopes on a trip to their school’s summer camp. When fate and bad luck scupper their plans, a small bingo win soon sees them boarding a train and heading for unknown territory. From the tumultuous streets of early ‘80s Liverpool to the sun dappled countryside of North Wales, the boys discover a new appreciation for the world and people around them and an opportunity to change their futures. Co-starring Ian Hart and James Hazeldine the series was a big hit, gripping audiences to the very end.

David fondly remembers his time on the series, remarking ahead of the reunion that “One Summer was the most important job of my life. Without it I would never have got the start I needed to pursue this wonderful career that I love so much!” sentiments mirrored by his co-star, Spencer, recounting it as “one of the happiest experiences of my life. I’m delighted that it has found an audience and inspired many people.”

Have questions for the cast? Submit your questions on social media using, using the hashtag #OneSummer before and during the live stream. Remember to tag us: @networktweets @LivEveryPlay

As the days get shorter and while we cannot be together in person this exclusive live ‘night-in’ can give us a chance to reminisce about that One Summer we would rather remember.

Following a brand-new High Definition restoration One Summer is out now for the first time on Blu-ray exclusively via networkonair.com

Network will be collaborating with Liverpool Everyman & Playhouse Theatres to help raise funds for Young Everyman Playhouse to help them continue their important work with the next generation of theatre practitioners. The organisation, which has seen its doors closed once again due to the ongoing coronavirus pandemic, played an important part in the early careers of David Morrissey and Spencer Leigh, who found their feet on the boards of the theatre before landing their roles on One Summer. To donate to YEP please visit their page HERE. A percentage of all One Summer Blu-ray sales made via networkonair.com will also be donated to the charity.

“We’re really grateful to be a part of this Q&A with Everyman Youth Theatre alumni David and Spencer, and would like to thank Network Distributing for choosing to support Young Everyman Playhouse. The money raised will help nurture the creative talents of the next generation of young theatre makers coming out of Liverpool.” Matt Rutter, Young Everyman Playhouse director.