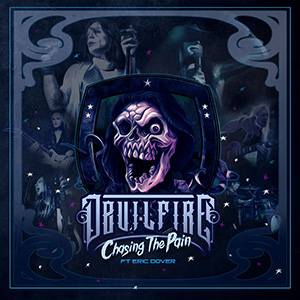 Dark melodic hard rock quintet, DEVILFIRE (as featured on the latest ‘Soundcheck ’em out’ show), have released a brand-new single and lyric video. CHASING THE PAIN which is available through all main download and streaming platforms here: https://ditto.fm/chasing-the-pain

There is also a new lyric visualiser video (see below).

Chasing The Pain features a collaboration with former Slash and Alice Cooper vocalist, Eric Dover and is the second single to be released from their forthcoming album – Black Soul Vendetta – scheduled for release later this year.

Devilfire’s frontman, Alex Cooper said of the song, “During the recording stages I wanted to push a certain hook that I had in mind for the chorus and I had the sounds of an Aerosmith type horn section in my head.

“Fellow Birmingham musician, Ash Sheehan, had just come back from touring with Glenn Hughes and I managed to coax him into the studio to provide the horn section. Ash was awesome.

“I wanted to write a song about split personalities and try to paint a picture of everything being perfect in a relationship but having the overall urge to just throw it all away and mess it up. It was playing around with this idea that gave me the idea for having a second vocalist.

“It was at this point I was talking to a friend who mentioned he was working with a band over from LA called ‘Lost Angels’, on their UK tour. The band was made up of some incredible players including Ryan Roxie (Alice Cooper), Troy Patrick Farrell (White Lion), EJ Curse (Gilby Clarke) and a big influence in the shape of singer, Eric Dover.

“Eric has played with Alice Cooper and Jellyfish. But I was most familiar with his work in Slash’s Snakepit – singing on the band’s first album, It’s Five O’ Clock Somewhere.

“I was introduced to Eric at his show in Wolverhampton. I mentioned the song and the idea of the duelling vocalists/personalities and he seemed very interested. When he returned to LA he got to work sending me vocal takes and I was blown away! It was perfect and it flawlessly interwove with my own voice.

“Not only does it rock but it now includes a legendary voice and an incredible horn section, all interwoven with that classic Devilfire sound. I couldn’t be prouder.”

Devilfire are a 5-piece hard melodic rock engine from Birmingham, England formed off the back of an early studio session between long term friends, Alex Cooper (producer) and drummer, Lars Wickett. Their working project, then known as Devilstar, took 3 years to gestate before things fell into place on a lengthy tour of Eastern Europe as guests to Tarja Turunen. That tour cemented a growing reputation as a live force and what followed was the undeniable power of their debut album, Dark Manoeuvres, released in 2017 to high acclaim.

Dark Manoeuvres was followed up with further sold-out dates on the road before the release of a short-run EP Out Of The Dark to placate fans’ demands for further material.

Now, with the release of Chasing The Pain, as a follow up to the well-received first single, Dream Evil, they introduce the world to their new full-length album Black Soul Vendetta. And they have only just begun.