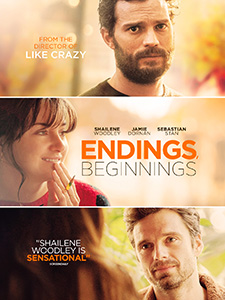 From the acclaimed director of Like Crazy, Drake Doremus ENDINGS, BEGINNINGS is a sincere and emotionally charged romantic drama with an all-star cast of Shailene Woodley (Big Little Lies, Adrift, Divergent), Jamie Dornan (Fifty Shades, A Private War) and Sebastian Stan (The Avengers, I, Tonya).

Daphne (Woodley), a young woman recovering from a break-up is at a turning point in her life and embarks on a few months of self-introspection. But when she meets friends Jack (Dornan) and Frank (Stan) at a party, everything changes. Daphne becomes involved with both of them, starting a steamy and complicated love triangle.