London based guitarist and singer songwriter Jack J Hutchinson has launched a Kickstarter campaign for his forthcoming album ‘The Hammer Falls’, which is due later this year.

Hutchinson and his band have spent the last 9 months working on the album at Momentum Studios, Devon, completing recording earlier this month. They are now looking to raise the final funds to pay for the mastering and vinyl pressing of the record.

Supporters on Kickstarter can sign up to a number of perks, including signed limited edition black and white marble vinyl, signed CDs, handwritten lyric sheets, private guitar lessons and even remote recording.

Hutchinson comments: “It’s an opportunity for people to be involved in the final stages of recording. We will be using Stardelta Mastering to prepare the tracks for vinyl pressing by DMS Vinyl – two fantastic companies that together will deliver the best possible sound experience. I personally think these are the best 11 tracks I have ever recorded, and I can’t wait for people to hold the final product in their hands, place it on their turn table and blow the fucking speakers off!” 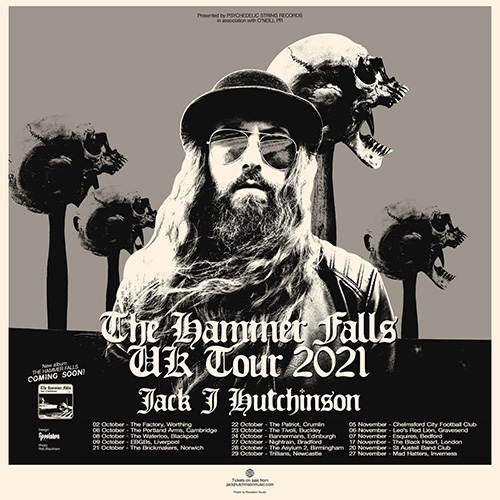 Hutchinson will return to the road later this year to coincide with the release of the record. He will play 17 dates across the UK, with the album launch show taking place at The Black Heart, Camden, on November 17. Main support on the tour comes from Devon based modern rockers Firekind.

The Hammer Falls Kickstarter runs for 1 month until 9 June.

More info can be found here: