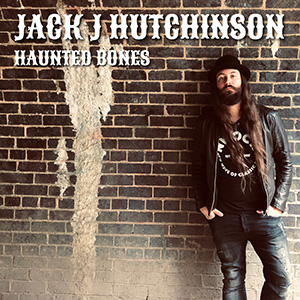 London-based guitarist and songwriter Jack J Hutchinson has announced the 2nd single from his forthcoming solo album, ‘Who Feeds The Wolf?’, which is set for release on 18th October 2019.

‘Haunted Bones’ will be released on 12 August on physical CD and digital formats, with an accompanying lyric video by New York based director Zak Muller.

The song features Lazarus Michaelides on bass and Felipe Amorim on drums, and was produced by Tony Perretta, who also helmed last year’s solo debut ‘Paint No Fiction’, which gained glowing reviews from publications including Classic Rock Magazine and Guitarist.

The track is a 3-minute slab of classic rock, with hints of AC/DC and Blackberry Smoke mixed with a Beatles-esque middle 8.

Explaining the vibe of ‘Haunted Bones’, Hutchinson comments: “It’s an angry tune, which is probably indicative of the way a lot of people feel about the world right now. The shit has really hit the fan and we are in a bit of a mess, both politically and environmentally. I guess my response is to plug in my Marshall stack and turn everything up to 11!!

The Jack J Hutchinson Band! will hit the road in September in support of the album, heading to Brazil for a three week run, before shows in Spain. The album will be launched in the UK at a special gig at Camden’s Black Heart on 22nd October.

The band will then perform at Planet Rockstock on 6/7 December. A full UK tour is scheduled for March 2020.

‘Haunted Bones’ will be available on limited edition vinyl CD, and across digital platforms from 12th August 2019.

‘Who Feeds The Wolf?’ will be released worldwide on 18th October 2019.

Below is ‘Justified’: the 1st single to be released from ‘Who Feeds The Wolf?’

Big Boy Bloater & The LiMiTs Announces October 2019 Tour Soundcheck: The Seahorses – Do It Yourself