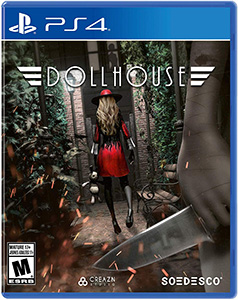 The first person psychological horror game Dollhouse has received a huge update three months after its release. The mega patch is now available on Playstation®4 and Steam®. With an abundance of useful feedback from the community, indie developers Creazn Studio haven’t been sitting around after its release. Creazn Studio has added two completely new gameplay mechanic and numerous single-and multiplayer updates.

‘Tale of two dolls’
Trapped inside a sinister dollhouse, players take on the role of Marie, a former detective suffering from amnesia. As they try to get Marie’s memories back in an attempt to find out what happened to her deceased daughter, they will come across two new dolls that appear in each level. The contrast between the dolls is big. Finding one doll will grant bonuses and help make the player’s life easier. She requires the players to play hide and seek as they need to catch her. The other doll must be avoided at all costs. She always lurks around when she is least expected and if players look at her too long, they will get debilitated.

‘It curses’
Another horrifying feature added to the game is ‘it curses’. This new mechanic makes players choose who they want to cut or save in their movie. As players slowly recollect Marie’s memories, they are constructing a movie to discover the truth behind her deceased daughter. With ‘it curses’, players have to choose wisely who they want to cut out of their movie, as the ones they cut out will come back to haunt them. Each person that dies, will put a different curse on the player. On the flip side, whoever is saved, will grant the player bonuses.

An improved version
Besides the two gameplay mechanics, Dollhouse has received many bug fixes, graphical improvements, multiplayer updates and optimized gameplay flow among others. Creazn Studio has added over 2.9 GB of patches and additions to the game. All the updates make for a completely new and pure horror experience.

Welcome to the twisted world of Dollhouse. Enter the mind of Marie, a detective suffering from amnesia. Lose yourself in an intense game of cat-and-mouse as you attempt to interpret the charred remains of your memories. You know only one thing for certain, your daughter Emily died that night. Will you unravel the truth?