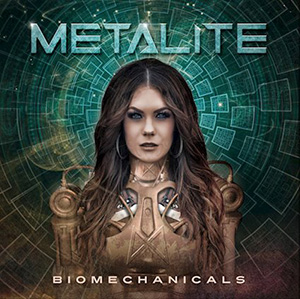 Two years after their exciting debut ‘Heroes In Time’, the Swedish Melodic Metal band Metalite return with a new singer and could be the new heroes of Modern Metal – trendsetting, epic and of highest quality.

Influenced by the concept of bands like Within Temptation, the quintet from Stockholm reinvent classic Melodic Metal, “We see ourselves as a modern band that works differently than most of the Melodic Metal bands out there“, says guitarist Edwin Premberg. ‘Biomechanicals’ continues to raise the bar from their debut and turns everything to the max. A richer production, stronger songwriting and their use of electronic elements, influenced by the Trance Era of early 21st century, fit perfectly into this new sound, as does new single Erica Ohlsson.

Premberg is very happy with their new singer “We knew that we had to go for a singer with great talent, so I searched where a good singer belongs, on stage!“ He found his new muse at a concert in Stockholm where Ohlsson gave a stunning performance. “I heard her and just knew she was perfect.”

Metalites’ AFM debut album is a futuristic glittering release wound from melodic and symphonic metal. ‘Biomechanicals’ is the metal version of ‘Brave New World’. Premberg states about the song Social Butterflies, “Social media steals more and more of our time, everyday“, said Premberg, “It is all about the addiction of being online and connected to the world – 24/7.“

Metalite wrap up their important message: turn off your devices and turn on your brains!
A fire in their bellies, an album sparking from another high end production of Jacob Hansen (Volbeat, Amaranthe), Metalite are more than ready for their next step and it could be a very big one!