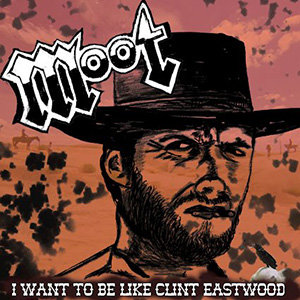 Delivering a restrained-yet-moody vibe, Australian garage punk act MOOT pay homage to Clint Eastwood in a Sex Pistols meets The Good, The Bad and The Ugly kind of way.

Latest single, I Want To Be Like Clint Eastwood is the follow up to their recent single I Hate Hippies – MOOT’s comment on the image-conscious hipster. The one that puts on the “I’m in touch with the earth and wellness” schtick, but really, it’s just mummy and daddy financing a self-absorbed arrogant hypocrite.

Driving into the territory occupied by the Dead Kennedys, Radio Birdman and Black Flag; MOOT deliver it with ease, showcasing a wealth of experience and talent.

Stream/buy ‘I Want To Be Like Clint Eastwood’ HERE

ABOUT MOOT:
MOOT shouldn’t be here. They never expected to be here. Not only did they not expect to last, they expected to be shut down within three songs of their first ever set. It didn’t happen that way.

Having done time in cover bands, MOOT was formed with the intent to play music the band loved and grew up with in venues which were too scared to book anyone who wouldn’t play mainstream standards. It was an experiment to prove that there were music lovers who would come to venues who didn’t want Chisel and Powderfinger but wanted their music – The Stooges, MC5, Dead Kennedy’s, Radio Birdman etc.

Six years and many gigs later, hitting the pubs and clubs and from strong  crowds to empty rooms (let’s be honest), MOOT have become a tight four-piece garage rock band in the spirit of the bands they grew up with.
Their music is fast and their lyrics are sharp. No subject is above pulling down. This is a band which knows their punters have opinions,  a sense of humour, understand sarcasm and are just as frustrated as they are at what is going on.

***Make sure to listen to our ClintCast shows***