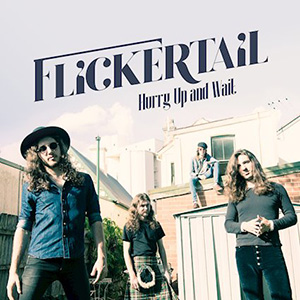 Sydney’s Flickertail have released the music video for their single, Back of My Mind, lifted from their upcoming 5-track debut EP, Hurry Up and Wait, out 16 March via Golden Robot Records and available for pre-order now.
Filmed by Jack Barratt and directed by Jonny Goldrick, Back of My Mind was written in the midst of reading James Joyce’s Dubliners with one of the lyric lines lifted directly from one of his stories and as they’ve said, if anyone finds it, the guys will buy them a pint at one of their upcoming shows.

Their new EP, Hurry Up and Wait could be called a concept style record: through screaming Les Pauls and thunderous drums, it tells the story of four dashing young men with no money having a bloody great time watching Braveheart, sinking tins and getting thoroughly excited about EPL highlights. It’s also a rough collection of love stories, but that’s much less fun to talk about.
In the studio, the boys landed Steve Balbi and Tony Wall, the latter of which has worked with just about everyone from Olivia Newton-John to KISS. Naturally, as lifelong devotees of honest, in-your-face guitar rock, they were beyond thrilled to record the next “Xanadu”.
Everything the band love about music is on this record. There’s guitar lines like Thin Lizzy, AC/DC boogie, bits of Slade stomp, rich vocal harmonies, Beatlesy melodies, and make-a-cinderblock-cry sincerity. It’s raucous love songs, played loud and honest with no autotune or sampling in earshot.

About Flickertail:
A four-headed Irish-Australian outfit hailing from Sydney’s Inner West, Flickertail (formerly The Bitter Sweethearts) play guitar-fuelled rock’n roll exactly the way it’s supposed to be played. Drawing inspiration from the likes of Thin Lizzy, The Darkness, and Oasis, the band honed their sound in the garages and booze dens of Sydney before hitting the road in 2015 to showcase their unique sound at every pub, club and backyard along Australia’s eastern coast.

Since their inception, the band have played relentlessly and are reaping the rewards. 2014’s single The End received airplay on Triple M and regional radio throughout New South Wales, Victoria and Queensland, whilst Guinness is Thicker than Blood has been played everywhere from Bendigo to Brisbane. The tail end of 2015 saw the band landing coveted opening slots with Aussie rock heroes Buffalo and Sarah McLeod on top of endless sweaty shows with local legends Black Aces, The Lockhearts, and Foreign Kings.  2016 saw them take their infamous zero-bullshit live show on the road once more, supporting the likes of The Casanovas and US juggernaut The Supersuckers.

Hurry Up And Wait tracklisting:
Let There Be Love
Talk
Fade Away
Green Eyed Girl
Back Of My Mind