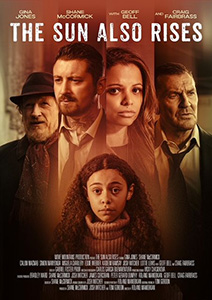 Move Mountains Productions have released the official trailer for new
film The Sun Also Rises, due for release in Summer. The Sun Also Rises
is the directorial debut of a full-length film by Roland Manookian (The
Football Factory, RocknRolla) and is produced by Shane McCormick (Castle In The Sky, Let’s Talk About George), Tom Gordon (Good Shout film collective Founder), Josh Witcher (Checkpoints, Castle in the Sky) and Franky Lankester (Ron Hopper’s Misfortune).
The film focuses on Raye (Gina Jones), a woman trapped in an abusive
relationship. The film charts her struggle to survive, her journey to
escape, and how the cycle of violence affects everyone who comes into
contact with it.
The Sun Also Rises is a beautiful film with an ultimately positive
message of redemption; it pays homage to the strength of the human
spirit. The film draws inspiration from the Ernest Hemmingway book
Fiesta: The Sun Also Rises, portraying Raye’s journey through the lens
of a metaphorical bull run.
Producer Shane McCormick says: “We have produced a film that looks to shine a light on the immensely damaging cycle of violence. We hope this helps sufferers of abuse and their journey of recovery.”
Director Roland Manookian says: “The film explores the cyclical nature
of domestic violence and how difficult it is to break that cycle. It’s a
story of empowerment and redemption. I hope the film empowers victims to come forward & find support. It’s a dark story which I tried to give some light to without exploiting or being voyeuristic. Being part of
this project has allowed me to really express myself.”
Actor Craig Fairbrass, who plays the character, Lee, says: “It’s an
emotionally driven film, a human story at its heart & a great script.
It’s a heavy-duty film”.
Make sure to listen to my interview show with Craig Fairbrass from February 2022.

Soundcheck ’em out: Audio Reign, Motor Sister, Fight the Fade FIGHT THE FADE release new single ‘On My Own’