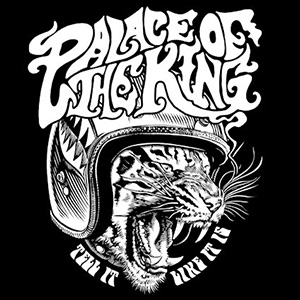 The new single from Palace Of The King – Tell It Like It Is, was written and recorded before the shit hit the fan during the antipodean summer, however Henwood’s lyric seems almost prophetic. It’s a finger to the forehead stomper that demands attention and every bit as fabulous as you’d expect from this superb band!

Produced by POTK singer/guitarist Tim Henwood, it’s obvious he has the great Mike Chapman (Suzi Quatro, Blondie, The Sweet) to thank for his production style here.

Mixing duties have been masterfully performed by Jonathan Burnside (Clutch, Fu Manchu, Nirvana, Grinspoon, Living End) taking the energy of the track to the next level and bringing it kicking and screaming into the modern era. In these crazy times, music just might help you get through. Even if it’s just for 3:27.

Let me ‘tell you like it is’. If POTK are anything to go by, rock and roll is still here in the middle of this shit fight, and it’ll still be here when it’s all over.

PALACE OF THE KING
Many doomsayers have been writing rock’s obituary. But they obviously forgot to tell Melbourne band Palace Of The King.

During the past few years, Palace Of The King have played hundreds of gigs all around the world and released two EPs and three acclaimed albums, with a fourth on the way.
The editor of The Age’s entertainment section, Martin Boulton, applauded the band’s blistering debut, White Bird/Burn The Sky. In a four-star rave, he wrote, “Just a little over two years into life as a band, Palace Of The King have played a staggering 200-plus shows. All that time on stage and hanging out together has honed a mighty sound hellbent on rattling the rafters, shaking speakers and, quite frankly, emulating their many obvious influences.”
Yep, Palace Of The King give a nod and a wink to the classics. As they declared in the closing cut on their debut album, “Don’t go changin’ things if it ain’t broke.” But they’ve also forged their own potent sound, with thundering riffs, mighty grooves and glass-shattering vocals.

How the Palace Of The King was built is a tale worth re-telling. At the end of 2012, the band approached Tim Henwood after seeing him sing with former Kiss guitarist Bruce Kulick. The guys needed a singer; Tim had no intention of joining another band but offered to help them find a frontman. Then Tim played the instrumental versions of the songs that ended up on the first EP. “When I heard the tunes, I thought, ‘I’m not gonna help anyone else get this gig!’”
Tim added his vocals, and returned the songs with a two-word message: “I’m in.”
The Palace Of The King live show was instantly embraced by rock fans. The Australian Musician Network covered one of the band’s early gigs. “These songs don’t really fit into a single genre,” the reviewer stated. “Except maybe ‘kick arse’!” And Melbourne’s Beat magazine said simply, “Palace Of The King set a new standard in Aussie hard rock.”
Palace Of The King dig the raves, but this is one band that’s more than happy to let the music do all the talking. Their message is loud and proud. They believe in the power of rock.
After touring Australia with Rose Tattoo in 2018, Palace Of The King are reuniting with the rock ’n’ roll outlaws and returning to Europe in March 2020 for a monstrous run of dates.
Palace Of The King’s fourth album will coincide with the tour. As Joel O’Keeffe, Airbourne’s lead singer and guitarist, declared: “They are the real f*ckin’ deal and I can’t wait to see them setting fire to Europe soon!” Joel loves Palace Of The King so much, he poached the band’s guitarist, Matthew “Harri” Harrison – the ultimate compliment.

After more than 700 gigs, including three headlining tours to Europe, Palace Of The King are road-hardened and ready to rock. Anywhere, anytime.