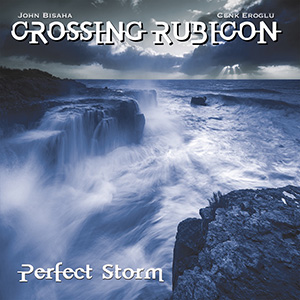 Frontiers Music Srl is pleased to announce the upcoming release of the debut album by Crossing Rubicon, a new collaboration that pairs multi-instrumentalist and producer Cenk Eroglu (ex-Winger, Xcarnation) with singer John Bisaha (The Babys). ‘Perfect Storm’ is out on 8th July, with its title song available as a single and video from today, plus a second single for the track ‘100 Thousand Years’.

“I have worked on many different styles of music as a composer and producer,” states Eroglu, “but in my heart I have always been a melodic rock musician and have written literally hundreds of songs in this style while trying to find the right singer-songwriter partner. Meeting John Bisaha was a miracle. We called our band Crossing Rubicon [yes, that river in Italy that Caesar crossed – if you know the story]. I was on the edge of that river for many years and I crossed it when John and I combined forces. If you are in love with real melodic rock, then this is it! I can’t wait to share these songs with you all!”

Bisaha adds: “Being born in the early ’60s, I have had the pleasure of being exposed to an extraordinary range of music and styles. When I really started getting into music in my teens, I locked myself in my room to absorb as much as I could and sing as many styles as I could. I naturally gravitated to the ‘then’ styles of rock, which are now considered ‘classic/melodic/album-oriented’. We really had no genre name for it back then! When my style took a sabbatical after flannel shirts and rap took over the airwaves, I knew I had to recreate myself and hoped the day would come for a rebirth. I have followed Frontiers for quite a while now and hoped for the day that I could become part of the family and bring a bit of myself (and my family!) to the party. After Cenk and I were put in touch, all of the pieces fell together and it just felt right! I think you’ll enjoy what comes out of this.”