PowerA – a leader in enhancing interactive entertainment with officially licensed gaming accessories – is excited to announce that the FUSION Pro Wireless Controller for PlayStation 4 is now available. This officially licensed controller is designed from the ground up to keep up with the play demands of the modern gamer and is available at retailers for £99.99.

The FUSION Pro Wireless Controller for PlayStation 4 features a mappable Pro Pack on the back that gives players the ability to assign button actions on-the-fly to the four removable paddles. In the heat of gameplay, being able to quickly access programmable commands without losing control of the thumbsticks can determine the difference between winning and losing. The FUSION Pro empowers players to Play Their Way with swappable analog sticks, anti-friction rings, and even a racing clip for masterful control in high-speed gameplay moments.

The gamepad is designed with ergonomics in mind with ALPS analog thumbsticks giving players firm control over their game and the option to switch from short to tall sticks. The soft-grip front and rubberized rear grips makes the FUSION Pro a comfortable fit even after long gaming sessions. The 3-way trigger locks can be adjusted for the perfect response while the magnetic impulse triggers provide enhanced precision feedback for more immersive gameplay.

All the Bells and Whistles

The FUSION Pro Wireless Controller for PlayStation 4 also features motion sensors, dual rumble motors, touch pad, lightbar LED, built-in speaker plus share, PS, and options buttons. It also comes with a USB charging cable for wired gameplay on PC and PS4 as well as a rechargeable battery that boasts over 20 hours of play per charge. 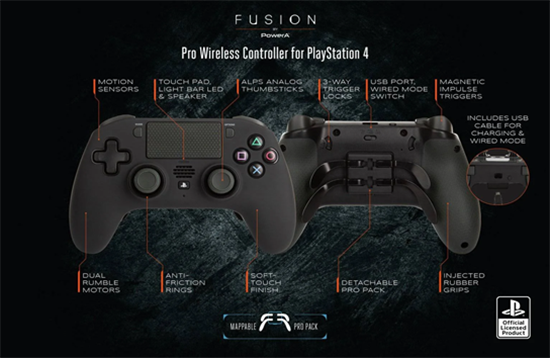