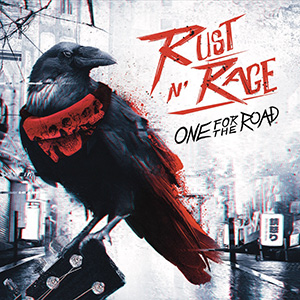 Frontiers Music Srl is pleased to announce the upcoming release of ‘One For The Road’, the new album by Finnish hard rockers Rust n’ Rage. Produced by Jimmy Westerlund of One Desire, it is out on 11th March 2022, with the song ‘Prisoner’ available from today as its second single and video following the November 2021 release of ‘Heartbreaker’.

Formed a decade ago, Rust n’ Rage have made a name for themselves in their home territory via two previous albums and countless live shows. The quartet are now ready to introduce themselves globally with ‘One For The Road’, which is chock-full of anthemic, hard rocking yet melodic tunes.

Hailing from the town of Pori in south-west Finland, the four band members all live for the same simple cause: Rock n’ Roll. It didn’t take too long for Vince, Johnny, Eddy and Jezzie to meet and realise they shared the same musical vision. However, although their influences might originate with ’80s legends such as Guns n’ Roses, Judas Priest, Mötley Crüe and Dokken, their songwriting is far more than the sum of its parts, even if they do retain a penchant for awesome hard rock riffs and deploy an occasional high-pitched vocal scream.

Having found a producer in Westerlund who could help them realise their full potential, the band began recording new songs that caught the interest of Frontiers, who subsequently signed them. Expect to have fun with these Finns in 2022.