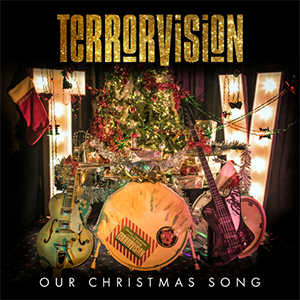 Terrorvision are ready to rock this Christmas with Our Christmas Song, released on 29 th November through Total Vegas Recordings.
Celebrating the 25 th anniversary of their biggest album How to make friends and influence people during a sold-out tour in May 2019, the band finally decided to make good on a long-standing ambition to write a Christmas single – a proper, glorious foot stomping, arms around each other Wizzard/Slade inspired Christmas single!
“Our Christmas Song is that festive present to the fans, and anyone else with a love of the heady days of pop music, when the Christmas No.1 mattered and the main event on Christmas day was settling down to watch  Top of the Pops with the last few segments of your chocolate orange, washed down with a cheeky swig of your Gran’s Snowball.” exclaim the band
Our Christmas Song is accompanied by a festive inspired and over-the-top video (see below).
Formed in 1988, Terrorvision’s aim to be the biggest band from Bradford (beginning with ‘T’) still holds true. Five hit albums and 13 Top 40 singles (peaking at No.2!) between 1993 and 2001 saw them catapulted from pub gigs in Yorkshire to arena’s and major festival stages across Europe.
Whether they were doo-wopping their way to  Oblivion, hailing the advice of whales and dolphins in  Perseverance, or celebrating the mind-altering properties of a certain strain of cactus juice, Terrorvision made friends and influenced fans across the world and confirmed themselves as the ‘go to’ rock band for festival fun and games throughout the 90s.
2001 saw an end to the ride. Frazzled and brain-fried after ten straight years on the road, the band went their separate ways to try out other things, in life and in music. Marks’ Blunderbuss delivered the metal, Leigh’s Malibu Stacey some snotty glam-tinged punk and Tony’s Laika Dog alt-rock with a side order of indie.
A handful of gigs and festival appearances from 2005-2010 (which proved, like riding a bicycle, that being back on a stage and rocking the s*** out of it came naturally) led to the band writing and releasing their first album for ten years, Super Delux. Featuring new drummer Cam, it delighted their hardcore fan base with a barrage of hooks and everything turned up to 11!
Touring  Super Delux throughout 2012 (with  everything turned up to 11) left the band somewhat fried and mangled all over again, so everyone split for calmer waters and new challenges.
An out-of-the-blue invitation from Thunder to guest on their 2016 arena shows was the impetus the band needed to get back in a room together, and since then Terrorvision have been out to play a handful of gigs each year, to increasingly large crowds, in increasingly bigger venues, the likes of which they haven’t played since the 1990s. It seems more and more people want a bit of Terrorvision back in their life.
Downloads of  Our Christmas Song are only available from the band’s store, on preorder until December 13 th , (for a shot at bothering the Christmas week chart), where you can also buy it alongside a limited edition signed Christmas card from the band that comes exclusively with another new track to download ‘ By My Side’.
Terrorvision’s 2020 UK Tour dates
February
07 Leeds, Warehouse (SOLD OUT!)
08 Leeds, Warehouse (SOLD OUT!)
27 Liverpool, Grand Central Hall
28 Wolverhampton, Steel Mill
29 Feb  Poole, Winter’s End Festival
August
29 Newark, Stonedead Festival
November
07 Nov  Great Yarmouth, Hard Rock Hell Chapter XIV
For tickets go to:  http://terrorvision.com/gigs.html
Terrorvision is:
Tony Wright – vocals
Mark Yates – guitar
Leigh Marklew – bass
Cameron Greenwood – drums
Milton Evans – keyboards