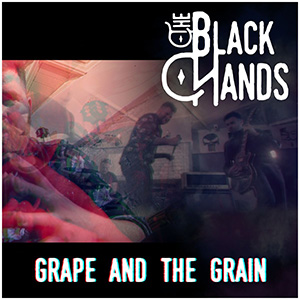 The Black Hands release a brand new single and video – Grape And The Grain on Fri 03 May 2019, as they prepare for the release of their highly anticipated debut album.

Grape And The Grain is taken from their forthcoming debut, Electric Premier Theatre, scheduled for release on Fri 17th May 2019 and available for pre-order now: http://www.theblackhands.com/shop/

Grape And The Grain will be available via all major download and streaming outlets. It is accompanied by a performance video produced by LensGo Visual Media and filmed in Sheffield.

The Black Hands are a rootsy rock/blues outfit from Chesterfield, England, in the mould of Free, Cream and more recently Rival Sons and The Temperance Movement. Throw in some deep south influences from yesteryear and you will start to picture where The Black Hands are coming from.

The band have actually been around since 2010 but have been ‘derailed by life’. A mixture of marriage, births and unfortunately bereavement all colluded at the wrong times to hinder the obvious talent on offer. Now they are back with a bang and ready to fulfil all the early promise that garnered much breakthrough recognition.

Guitarist, Daniel Riley said: This song was written during one of our darkest periods as a band. Andy’s (Gannon, singer) dad was seriously ill and passed away during the writing and recording process. We were going to postpone the session but looking back, Andy simply needed to do it. It was recorded in his living room and you can hear the emotional pain in his voice and is arguably one of his best performances on the album.”