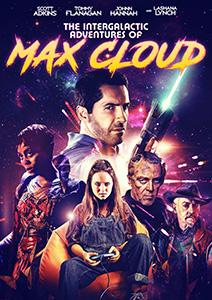 Forget Fortnite, step away from Among Us, switch off the console and step back in time for the crazy, retro-gaming, rip-roaring sci-fi comedy adventure THE INTERGALACTIC ADVENTURES  OF MAX CLOUD.

Dive into the action with plucky gamer Sarah (Isabelle Allen) and follow her misadventures as she accidentally becomes a character in her favourite video game. Taking on the avatar of Jake (Elliot James Langridge), she teams up with kickass action hero Max Cloud (Scott Adkins), and his trusty side-kicks as they do battle to save the world. The film pays homage to movies of the 80s and early 90s and is totally shameless, action, sci-fi fun.

Directed by Martin Owen (Let’s Be Evil, Twist) who co-wrote with Sally Collett, The Intergalactic Adventures of Max Cloud is released on digital on 18 January 2021, alongside DVD and Blu-ray formats, courtesy of 101 Films and (Yet) Another Distribution Company.

Brooklyn, 1990. When gamer Sarah is transported beyond the screen and into her most played game, she finds herself trapped on intergalactic prison planet Heinous, home to the most dangerous villains in the galaxy, including the bizarre Revengor (John Hannah) and evil sorceress Shee (Lashana Lynch). The only way to escape is to complete the levels. Teaming up with space hero, Max Cloud, they must take on terrifying tyrants with a little help from her not-so-savvy best friend, Cowboy (Franz Drameh), controlling the console from her bedroom. Will they finish the game…or is Sarah destined to remain a 16-bit character forever?

Sit down, plug in, and get ready for a gaming experience like no other.