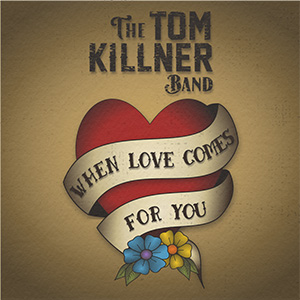 Tom Killner Band, led by the self-named blues/rock guitar maestro, releases a re-master of their song, When Love Comes For You (WLCFY) today, Friday 22nd May 2020.

Taken from the acclaimed album, Get Back Up, WLCFY will be available through all streaming and download services and is accompanied by a lyric/visualiser video (see below).

Speaking of the release, Tom Killner said, “We were bang in the middle of writing and recording our new album when the pandemic hit and while we can continue writing we thought it would be great to give this song a tweak in mastering and let the public enjoy it during these difficult times.

It’s one of our most popular songs live and just has a feelgood factor about it. Even though its about unrequited love and how it feels to be on the end of that, it’s about coming out the other side, determined to be ready for when love comes for you.”

He went on, “We worked with Andy Quinn (producer) at Edge Studios and laid it down as a live take musically, then I added vocals and the guitar solo, just to capture that live rock n roll sound. Despite all the technology available nowadays, sometimes it’s just great to encapsulate the moment, the energy of a live band.”

Hailing from deepest Yorkshire, England, Tom Killner was touted as a bit of a guitar prodigy from an early age and having recorded his full-length debut album ‘Hard Road’ at the tender age of 19 you can see why.

Since then Tom has played the length and breadth of the UK, as well as prestigious dates overseas; as a true road warrior, only fully content with guitar hanging from his shoulder and an audience to play to.

‘LIVE’ was released in 2017 and cemented his status as a true six-string virtuoso, coupled with an amazing vocal range and tone. Delivering a staggering array of songs, both blues classics and showing a deft skill at original song-writing, the album, recorded at a single live show, opened the eyes (and ears) of the blues rock industry.

The studio follow-up in the form of Get Back Up in 2018 saw the bright young gun come of age and deliver a killer album that has touched thousands of listeners and brought new fans and critical acclaim across Europe and beyond.

Tom is now deep into writing his next masterpiece which will no doubt cement his reputation of being a true six-string songsmith, with the added delight of a soul-drenched voice to set him apart.

The Blues Podcast To Host Charity Blues Quiz Soundcheck interview: Adrian Vandenberg back on the show

Something for the weekend? How about a double dose of Decade of Decadence shows? Ep262 released on Saturday & Ep263 on Sunday. #podcast pic.twitter.com/c9G0JWUdXY