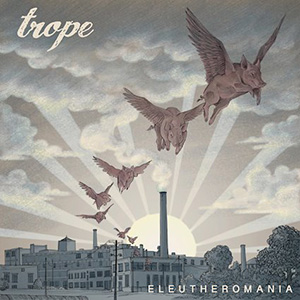 Studenberg discloses “My love for music has always been like a life vest for me in a sea of uncertainty. I think most, if not all, people have tumultuous scenarios in their life that impact them at different levels based on so many factors. And some people have more or varying tools on how to deal with those things. My tool is artistic expression and it’s driven me to want to create something long lasting that I could be proud of.”

Trope have released singles “Lambs”, a cover of the Tears for Fears classic, “Shout”, and “Pareidolia”. They’ve performed at LA’s Whisky A Go Go, The Viper Room, and the Hollywood Improv and played the main stages twice at Summerfest in Wisconsin. They were invited on an 18-date European tour across 7 countries, including 11 dates in the UK alone with Kings X, which has been postponed, and were invited to open up for The Cult in Reno, Nevada, among other high profile shows.

“Eleutheromania” is an album of contrasts: at once polyrhythmic and bombastic, while maintaining lush melodies. This is a band that puts music first. The album has both a 90s alternative rock influence and also a progressive influence that explores new ground. The constant time-signature changes are seamless, really pointing to the musical and song writing proficiency of the band who focus more on groove and feel than math but have done the math all the same.

About TROPE:
Trope is an alternative rock band with progressive elements featuring vocalist Diana Studenberg. The band formed in 2016 and spent the next couple of years writing and recording demos which became their upcoming debut album “Eleutheromania”.After recording the demos for “Eleutheromania”, they garnered the attention of the music industry including Mike Fraser (ACDC, Metallica) who agreed to engineer the album. David Bottrill (Tool, Peter Gabriel) also expressed interest and agreed to creatively consult and mix the album, and Ted Jensen (Halestorm, Stone Temple Pilots) joined the team as mastering engineer.
Trope have played the main stages at Summerfest for two-consecutive years and were invited on an 18-date European tour with Kings X, and to open for The Cult in Reno, Nevada. They’ve played world-renowned venues including the Viper Room, The Whisky and the Hollywood Improv and were featured as one of HEAVY Mags’ Top 40 Female Rock Acts in their Ladies of Rock Edition in 2019 alongside Lzzy Hale, Lacuna Coil, Jinjer, The Runaways and more. Their most recent rock cover of ‘Shout’ by Tears for Fears was aired on terrestrial radio in the US, Europe and South America. They are currently managed by World Entertainment Inc who manage Kings X, Dave Lombardo, Morbid Angel and others.