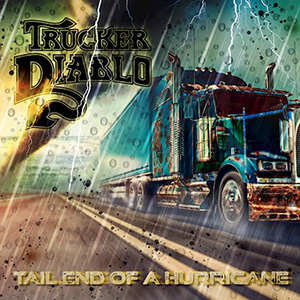 TRUCKER DIABLO have released their new single and video ‘I Am Still Alive’, new album ‘Tail End Of A Hurricane‘ is set for release on 7th May.

TRUCKER DIABLO release their 3rd single ‘I Am Still Alive’ from forthcoming album “Tail End of a Hurricane” A true stadium rocker, written just before the pandemic and song about survival.  The suns out, turn it up, share with friends and groups, buy the album… Drink Many Beers, Destroy.

This album takes a few diversions on the main road that the Big Truck normally drives on, the almost punk attitude and feel to ‘Insects’ with its social commentary on how we’re all just worker insects feeding everything to the corporate machine for them to steal our being. Closing track ‘Bury The Ocean’ was the last song written for the album, and its crushing guitar and build to an epic ending is a sitting reminder that while times are tough now, we will get out the other side of this situation!

The one thing you do expect from Trucker is big riffs, big choruses and big performances, and this album doesn’t disappoint, from the sing along Rock Kids of the 80s, the energy of Insects, the short sharp punch of ‘Slow Dance’ or the laid back tale, ‘Woodstock to Vietnam‘, where 2 friends In the hippy movement of the 60s choose different pathways for their life, you’ll know you’ve opened your front door to see the Big Truck parked up outside, engine running, exhaust fumes pumping out the pipe, door laying open invitingly……….

Make sure to listen to my interview show with Trucker Diablo.