VYPERA : ‘Eat Your Heart Out’ 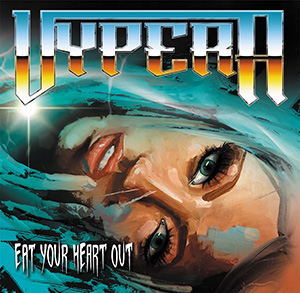 Frontiers Music Srl is pleased to announce the forthcoming release of ‘Eat Your Heart Out’, the debut album by Swedish hard rockers Vypera. Out on 17th June, a first single and video from it entitled ‘Standing On The Edge’ is available from today.

Formed by lead singer Andreas Wallström, guitarist Christoffer Thelin, bassist Andreas Andersson and drummer Johan Pettersson, the group started out in 2016 as a covers band called Madhouse, but changed their name to Vypera when they began writing original songs that acknowledged influences such as Rainbow, Icon, King Kobra, London, Triumph and W.A.S.P.. Their signature style is classic hard rock played with immense pride, joy and panache.

“We are head over heels thrilled that we have been given the opportunity to show off what we have been up to musically,” the band state. “Frontiers Records have always had amazing bands that we love to death, and now we have a place there too. It’s sick…but we are so up for it! We are more than excited. See you out there!”