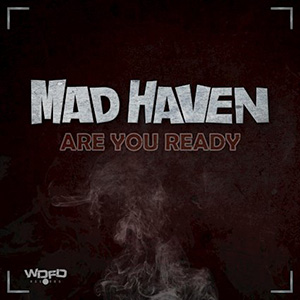 Welsh rockers Mad Haven release their new single & video for ‘Are You Ready?’ today, 30th Aug, out on WDFD Records.

Mad Haven formed in September 2011 and have been playing gigs throughout the UK since then, their hard work and dedication gaining an ever growing following. The band have played gigs & festivals up & down the country, including supporting bands such as FM, Massive Wagons, The Virginmarys, Florence Black, Toseland, Bad Touch, Tequila Mockingbyrd and Warrior Soul, to name a few.

They will be making their first appearance at Winterstorm Festival in November this year alongside the likes of Skid Row, Diamond Head, Uli Jon Roth and Last In Line, and already on next year’s agenda is a slot at Hard Rock Hell AOR Festival in Great Yarmouth. After the successful release of their EP “The Truth”, their second EP was released in June 2018, hitting all the usual digital platforms.

Mad Haven will be releasing a brand new 5 track EP on 27th September Their first single ‘Run Away’ is out now and is available via all music streaming platforms.

The band look forward to the busy schedule they have ahead and are writing and recording more new material in preparation for their next releases.