Sundown: The Vampire in Retreat 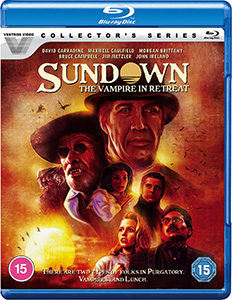 After thoroughly enjoying The Wraith, next up for review in the Vestron Collector’s Series blu-ray’s by Lionsgate UK is Sundown: The Vampire in Retreat.

Another title that I owned on ex-rental VHS, it was a pleasure to see it restored and remastered on blu-ray, complete with some very entertaining special features.

Sundown is a comedy/horror vampire movie with an American Western atmosphere, where the main bloodsuckers don’t suck blood!

Purgatory is a small isolated town in the middle of nowhere where its vampiric residents cover themselves in sunblock to walk around in the daylight, and sustain themselves on synthetic blood made in the local factory thanks to head vampire Mardulak (David Carradine) decreeing that it should be so.

Some of the vampires however want to go back to their more traditional ways, and this is taken to the next level when a descendent of Van Helsing (Bruce Campbell) appears in town.

Van Helsing, along with the creator of the synthetic blood and his family who turn up in town after being asked to go there, are the catalyst for a vampire vs vampire battle to decide whether it will be real or synthetic blood they will feast on going forwards.

Directed by Anthony Hickox, Sundown is a silly, slapstick horror/comedy that is far more comedy than horror, complete with another over the top performance by Bruce Campbell, and bloody practical effects that are more humorous than shocking.

David Carradine plays his part quite seriously, especially when compared to the theatrics of Bruce Campbell, Maxwell Caulfield as one of the vampire rebels, and M. Emmet Walsh who steals every scene that he’s in.

Sundown has it’s tongue so far into its own cheek that it nearly bursts out the other side, so if you’re a fan of the sillier side of horror then this is one to pick up.

The picture quality (as was the case with The Wraith) is excellent and the special features are well worth watching.

Beyond a Steel Sky to hit console in UK from Nov 30th Review: Naked