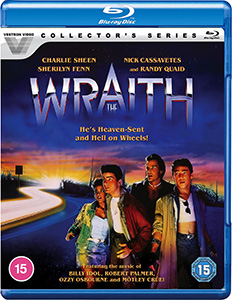 Cheers were emitted when the Vestron Collector’s Series blu-ray of The Wraith (released by Lionsgate UK) dropped through the letterbox here at 60MW Towers the other week. A favourite of mine since owning the ex-rental VHS back in the 80’s, it was an absolute pleasure to see that another cult classic originally released by Vestron Video has been restored and remastered, while also being accompanied by hours of fantastic special features.

The story plays out like a horror/sci-fi version of High Plains Drifter, with the arrival of a stranger (Jake: Charlie Sheen) in a small Arizona town causing some people to question who he is as he looks vaguely familiar to them. Thankfully they didn’t see his mysterious appearance outside of the town as he and his sleek futuristic car formed from balls of light from the sky.

Among those who are intrigued by him is Keri (Sherilyn Fenn); a young woman who is being  controlled by Packard (Nick Cassavetes); a guy who bullies everyone around him and wins “pink slips” from strangers by winning head to head car races by any means necessary.

Jake and Keri become far too friendly for Jake’s liking, and so Packard challenges him to a race. This begins a series of events whereby Packard and his gang of ne’er-do-well’s begin to suspect that Jake is far from who he seems to be and find themselves in a battle that they are definitely not prepared for.

The Wraith is both completely ridiculous, while at the same time being hugely entertaining. Nothing is ever fully explained as to how “Jake” makes his return to the town, and an exploding/regenerating car from the skies is just a given!

I always find Charlie Sheen’s 80’s and early 90’s movies very watchable, and once again he exudes an effortless screen presence that endears me to his character.

This laid back performance is balanced beautifully by the scene chewing rants by Cassavetes, as well as the always entertaining Clint Howard as “Rughead” the mechanic (complete with WILD hairstyle), and David Sherrill and Jamie Bozian as Packard’s completely bonkers gang members Skank and Gutterboy.

Watching this restored and remastered blu-ray was almost like watching it for the first time and is a far cry from the memories of my beloved ex-rental VHS. The picture is crisp and clear with vibrant colours, while the two commentary tracks, interviews and featurettes on the special features kept me highly entertained long after the end credits had rolled on the main feature. This film also has an awesome soundtrack, which sounds better than ever when cranked through my home cinema system while watching this release.

I look forward with great anticipation to more of these Vestron Collector’s Series releases from Lionsgate UK.