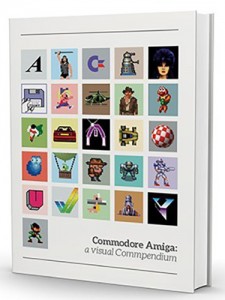 The Amiga celebrated its 30th anniversary recently so what better way to honour this amazing machine than by taking a look at Commodore Amiga: A Visual Compendium.

The Amiga was a huge part of my teenage years and gaming in general. It was my second home computer, the first being the Spectrum 48k and although I loved the Speccy, there was something really special about the Amiga.

This book started life as a Kickstarter and was massively successful exceeding the original target of £25,000, finishing with a final total of £129,866. This goes some way to demonstrating the desire and interest for this project. Sam Dyer from Bitmap Books previously created Commodore 64: A Visual Compendium which was again a successful Kickstarter.

Commodore Amiga: A Visual Compendium is an absolute monster. I fully appreciate that this isn’t an accurate or technically proficient way to describe a book, but it’s hard to think of any other way to do it justice. Weighing in at a huge 424 pages packed full of Amiga goodness, the one word that I would use to sum up the book is quality. It’s one of those books that you find yourself getting totally lost in absorbing all the text and gorgeous images.

There is a fascinating chapter on the birth of the Amiga with concept drawings and artwork of how the Amiga would finally look. Scattered throughout the book are overviews of some of the most iconic and influential names connected to the Amiga such as Sensible Software, System 3, Team 17, Factor 5, DMA Design and Cinemaware.

If you grew up with an Amiga you will know that these companies created some of the most amazing games that made you proud to be an Amiga owner. IK+, Lemmings, Alien Breed, Worms, Sensible Soccer, Cannon Fodder, Wings, It Came from the Desert, Turrican and the multi million selling Last Ninja series. These are just a few of the games that remain synonymous with the Amiga.

The book also features interviews with some of the leading figures who were associated with the Amiga and worked on the likes of Defender of the Crown, Super Cars 2, The Chaos Engine, Speedball 2 and Lotus Esprit Turbo Challenge.

As you’d imagine there is a section dedicated to the demo scene which was so popular amongst Amiga enthusiasts, giving them an opportunity to show off their skills and gain a cult following along the way.

The majority of the book includes many of the games that appeared on Amiga formats including the CD32. I’ve listed a few of the games above but this by no means covers the amount of beautiful content featured. The games are set out in a double page with a screen shot taken from the game accompanied by a paragraph or two from individuals who were connected with the game or have a deep admiration for it. It really is stunning!

Sam Dyer has created a beautiful piece of work. This book really is a must for fans of the Amiga and will serve as a wonderful reminder of what an incredibly special and influential machine the Amiga was.

His next book in the series is ZX Spectrum: A Visual Compendium and will hopefully be available in October 2015.

I love video games and movies as much as I love my children. However, I'd rather face off against the worst end of level boss, and watch the scariest horror movie than visit another soft play! Thanks for taking the time to visit the website and read this review. Please send any complaints to Dave and any money to me!
Live Event: John Robertson Live Event: Mam I’m ‘Ere