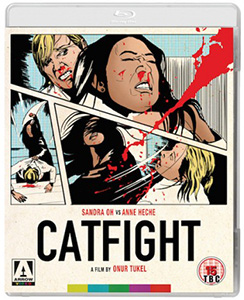 Veronica (Sandra Oh) and Ashley (Anne Heche) are former college acquaintances whose lives have taken them in different directions since they last saw each other. Veronica is a self entitled housewife who is a borderline alcoholic and an embarrassment to her successful husband, while Ashley is a struggling artist who lives with her girlfriend Lisa (Alicia Silverstone) and treats her personal assistant Sally (Ariel Kavoussi) like a piece of trash. When their paths cross again at a party, a verbal exchange quickly escalates into a bloody and life changing fight that has longterm repercussions for them both.

Basing a movie around 2 narcissistic characters that care little for those around them and whose self obsessions leave little room for empathy from the viewer is a very brave move indeed, but all credit to writer/director Onur Tukel for crafting a story that overcomes the initial superficial mentality of its leads, and emotionally unravels them layer by layer until the movies finale when their emotions are laid bare and are as raw as their battered and bruised flesh.

With cinematography and humour in a similar vein to Arrested Development, Catfight delivers dark humour along with female vs female fight scenes that would have Rocky Balboa thinking twice before getting into the ring with either of them.

The fights between Veronica and Ashley increase in intensity with each meeting between them. Not restrained to the usual hair pulling and grappling as seen in most female fights, these 2 trade kicks and punches that opens up flesh and starts the blood flowing. Neither are opposed to utilising hammers, wrenches, tyres and ANYTHING close by to get the upper hand, and both have the inner strength to not give up, which leads to fights on an epic scale as the one between Roddy Piper and Keith David in They Live.

It is hugely unfair though to concentrate on the violence in Catfight, as the central performances from Oh and Heche are superb. Despite playing unlikeable characters, you can’t help but feel for them as their lives begin to unravel out of their control, and both portray a huge range of emotions in an entirely convincing way. The supporting cast is superb too, with Alicia Silverstone being a particular highlight for me. Her love of Ashley and the joy of expecting a child together is palpable, which is then turned up a notch in a fantastic and cringe inducing ‘baby shower’ scene whereby nothing is perfect for their yet unborn child. A later meeting between Ashley and Lisa is both life affirming yet heartbreaking at the same time.

To give too much of the story away would be to take a lot of the enjoyment and surprise away from an initial viewing, and this is a movie which also warrants repeat viewings. Much like real life, it is amazing to see how people can constantly blame others for their own shortcomings in what they have not achieved, while at the same time denigrating those whose efforts have finally paid dividends after years of hard work. The paths of both Veronica and Ashley pivot on 2 separate meetings where each blames the other for the proceeding degeneration of their lives, yet on reflection (and even clearer on a repeat viewing) it is the actions of themselves which led to their unsatisfactory existence, yet each still insist on blaming others.

I went into Catfight knowing nothing at all about it and I’d advise you to avoid any other spoilers or plot points and buy this immediately. It’s 90 minutes of fantastic entertainment which rewards repeat viewings and sparks some good conversation about the human condition.

As always with releases by Arrow Films, there is a great range of special features which enhance the viewing experience and are extremely informative and entertaining.

FIRST PRESSING ONLY: Booklet, featuring new writing on the film.

Review by Dave (host of 60 Minutes With) from a disc kindly supplied by Arrow Films.