Having already reviewed Volume 1 of Powerhouse Films Hammer boxsets, it was with great anticipation that I sat down to watch the 4 titles contained within Hammer Volume 2: Criminal Intent, which features 4 classic thrillers from the vaults of Hammer Films released on Blu-ray for the very first time, including premiere presentations of the complete, uncensored UK theatrical release versions of Val Guest’s The Full Treatment and Cyril Frankel’s Never Take Sweets from a Stranger and a host of new and exclusive extra features. 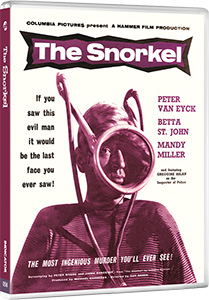 Already suspicious that her stepfather Paul (Peter van Eyck) was responsible for the death of her biological father, Candy (Mandy Miller) is thrown further into a web of intrigue and fear when her mother is found dead in an apparent suicide.

When Candy gets too close to discovering the truth and reporting her suspicions once again to the authorities, Paul turns his murderous intentions towards her.

The Snorkel’s narrative is predictable from the very beginning, but this in no way detracts from moments of terror and revulsion…especially regarding one particular scene where Paul protects his sheen of innocence by despatching of the family dog when it begins to pay too much attention to the titular snorkel.

The snorkel in question is used by Paul as a breathing apparatus when dispatching of his victims. Drugging his victims drink to put them into a deep sleep, he then seals the windows and doors with tape and turns on the gas in the room. They fall into a slumber from which they will never awake while Paul is lying in a secret compartment under the floorboards, where his snorkel is attached to tubes which lead to the fresh outside air. With the victim being found in a sealed room, no thoughts are paid by the authorities to any foul play other than suicide.

Paul van Eyck is perfectly cast as the villain of the piece, oozing barely contained evilness from every pore as he despatches anyone who gets in his way. While Mandy Miller does a great job of portraying a youth who is constantly finding it difficult to be believed by her adult peers as her frustration at not being listened to mounts with every passing minute.

The question is…would YOU do what Candy does at the very end?

Never Take Sweets From A Stranger (1960) 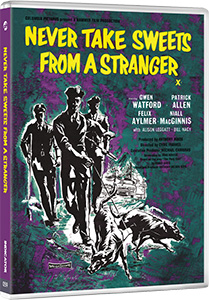 When Peter Carter (Patrick Allen) gets appointed the position of a school principal, he moves his wife Sally (Gwen Watford) and 9 year old daughter Jean (Janina Faye) into the town, where Jean makes friends with 11 year old Lucille (Frances Green).

While out playing together one afternoon, Lucille tells Jean of a place where they can get free candy. This turns out to be the home of Clarence Olderberry Snr (Felix Aylmer); the elderly figurehead of the Olderberry family who have been in charge of most of the towns proceedings for many generations.

Upon returning home, Jean innocently tells her parents about the afternoon that she has spent with Lucille, which consisted of cycling, getting candy from Mr Olderberry at his house, and then dancing for him…naked.

Shocked at this news, the accusations are levelled at Clarence Olderberrry Jnr (Bill Nagy) who of course denies that his father would participate in anything like that.

When it is finally taken to court, Olderberry Snr is found innocent and all seems to have been successfully resolved. However, while out playing together again, Jean and Lucille once more cross paths with Olderbrry Snr, and this time it looks like there is no escape.

Never Take Sweets From A Stranger was a bold film at the time of release and still resonates just as much today, especially with Operation Yewtree featuring so heavily in the news over the last few years. It is an uncomfortable subject to broach, and one which is debated quite freely during the course of this movie.

It is shocking to see how both Jean’s mother and Grandmother dismiss her initial story and side with the elderly Mr Olderberry, proclaiming his actions as being completely innocent and that Jean is exaggerating what actually happened. He didn’t make her take her clothes of did he? She took them of willingly didn’t she? She enjoyed dancing didn’t she?

It is only her father who sees this as a disgusting act against his daughter, while Olderberry Jnr of course also defends his fathers actions and blames the girls. Trying to get the whole truth of the situation out to the townspeople, and even the families involved, reflects the hardships that are still endured today by victims of similar crimes.

Yes this is a shocking movie, but it is also riveting and superbly acted, especially by Janina Faye who takes Jean from being a wide-eyed innocent girl, through to a scared, frustrated and angry victim who wants to find an escape from the situation that she has found herself in. 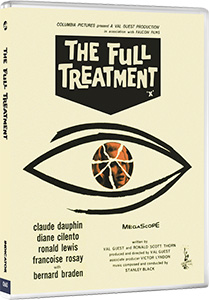 Alan Corby (Ronald Lewis) is a successful race car driver, who ironically is involved in a serious road accident while driving with his newly wed bride Denise (Diane Cliento).

After a year of recovery, they both take a vacation in the south of France. It is while on vacation that it becomes increasingly obvious that Alan is having problems containing violent urges towards Denise.

Local psychiatrist David Prade (Claude Dauphin) steps in to try and help Alan overcome his violent tendencies, and even gets Alan ready to race again. This of course is not the end, and one that you will need to watch to find out the true ending.

At 2 hours long, The Full Treatment does begin to outstay its welcome a little, and the dialogue heavy narrative has you yearning for a little more action to be spread across its running time.

While certainly not a bad movie, this was definitely the weakest of all 4 in this boxset. 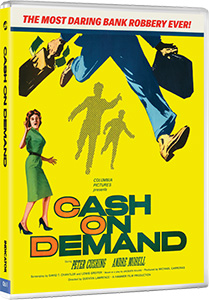 Harry Fordyce (Peter Cushing) is a local bank manager who is a stickler for his staff following all rules to the letter, and be damned what his staff think of him. When a bank inspector calling himself Colonel Gore Hepburn (André Morell) appears unannounced, Fordyce wants to make sure that everything is running smoothly.

Events take a turn for the worse when Hepburn turns out to be not who he says he is, putting not only the lives of the people at the bank in danger, but also the lives of Fordyce’s family too.

This is an acting tour de force from both Cushing and Morell. With 3 quarters of the movie taking place in the managers office and consisting of only verbal sparring between them both, the 2 legendary actors hold your attention through every nerve wracking minute, all the while keeping you on tenterhooks as to what might happen next.

Cash On Demand is not a movie that would ever get mentioned when people are questioned about their top 5 Hammer movies, as their Horror output always took centre stage and dominated the box-office, and I for one had certainly never seen it before! Thankfully this has been rectified with this outstanding boxset release from Powerhouse Films.

Hammer Vol 1 was fantastic, but this sets the bar even higher. Accompanied once again by a set of superb special features, this is yet another Indicator release that deserves to be displayed proudly in anyones collection.

You can buy Hammer Volume 2: Criminal Intent by clicking HERE. ALL money raised by purchasing from Amazon via our website is given back to our listeners and followers in upcoming competition prizes. The more people buy, the bigger our prizes.