After releasing volume 1 of the Ray Harryhausen boxset, Powerhouse Films have unleashed yet another amazing boxset, which this time contains 4 Hammer movies from the early 1960’s, all accompanied by a wealth of special features. 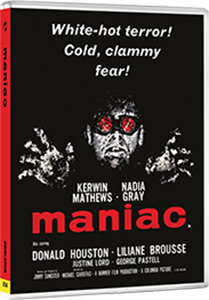 Jeff Farrell (Kerwin Mathews) is a down on his luck painter who, when finding himself in a seedy bar in France, falls for the owners stepdaughter Annette (Lilane Brousse). However, Annette’s stepmother Eve (Nadia Gray) gets his attention and persuades him to help her free her husband from a mental asylum…the reason for him being there is shown at the beginning of Maniac and I won’t spoil what he did to be locked up in there. All, of course, does not go directly as planned.

Maniac is one of the lesser known Hammer movies and more of a psychological thriller than the more traditional horror that they are known for. With a solid beginning and end, including a twist ending that is not telegraphed, it is unfortunate that the middle section is fairly ponderous, which isn’t helped by a poor performance by Kerwin Mathews.

Not one of Hammer’s best, but definitely worthy (especially in this great boxset with all the special features) of anyones Hammer collection. 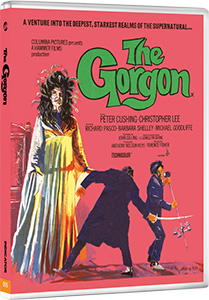 It is the early 20th century and a middle-European village is terrified. On the full moon, Megaera (the titular Gorgon) leaves her castle and turns to stone anyone who looks upon her face.

Often derided for its make-up effects, where the Gorgon stands out is in its wonderful gothic atmosphere and the always reliable direction of the great Terence Fisher. Add to this Hammer stalwarts Christopher Lee and Peter Cushing, and you have 83 minutes where your eyes are locked to the screen…just don’t look into the Gorgons face! 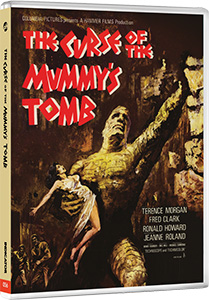 When British archeologists disturb the tomb of the ancient Egyptian Prince Ra, a curse is put upon anyone who has to deal with his sarcophagus. When Ra and his treasures are taken to an exhibition in London, he is suspiciously missing from the sarcophagus. The question is, has he been stolen…or has he come to life!?

While not as good as Hammer’s original Mummy movie, and with a narrative that plods along at a pace that you would expect a thousands years old mummy to shuffle along at, The Curse of the Mummy’s Tomb has a few plot twists and generally good performances to keep you interested through its short 81 minute running time. 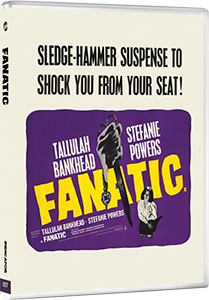 Patricia (Stephanie Powers) is about to marry her fiancé Alan (Maurice Kaufman), but before the wedding goes ahead she decides to visit Mrs Trefoile (Tallulah Bankhead); the mother of her former fiancé Stephen, who died in an accident. Pat stays the evening and goes to the church mass the next morning with Mrs Trefoile (a religious fanatic) where she confides that she wasn’t actually going to marry Stephen. This displeases (to say the least!) Mrs Trefoile who abducts Pat and vows to purify her for her sins and make her ‘pure’ for her son.

This is my favourite of the 4 in the boxset and can be solely attributed to the performance of Talulah Bankhead. The 1960’s saw a renaissance in the careers of 1920’s and 1930’s actresses who were thought ‘past their prime’ by the Hollywood insiders. The horror and thriller genres however thought differently and the likes of Bette Davis, Olivia de Havilland, Agnes Moorehead and many more saw their popularity rise once again. Every line that Talulah says is worth rewinding and watching again, and this is most definitely a movie that requires repeat viewings if not only for that, but also Donald Sutherland as a mute servant, which is probably a performance that he doesn’t bring up much in interviews…unfortunately.

Hammer Volume One: Fear Warning may not contain all the ‘big titles’ that immediately spring to mind whenever Hammer Films is mentioned, but this eclectic selection is a fantastic starting point for anyones collection, or a worthy addition for everyone already a Hammer fan.

Once again, the special features alone are worth the purchase price. Roll on Volume Two!

You can buy Hammer Volume One: Fear Warning by clicking HERE. ALL money raised by purchasing from Amazon via our website is given back to our listeners and followers in upcoming competition prizes. The more people buy, the bigger our prizes.