After having the pleasure of reviewing both Volume 1 and Volume 2 of the Indicator Hammer box sets, it was with great anticipation that I sat down for Volume 3: Blood & Terror.

Containing 4 movies from the Hammer vaults (all released on Blu-ray for the 1sttime) covering the time period of 1958 – 61, these are cinematic classics that you may well not be too familiar with. 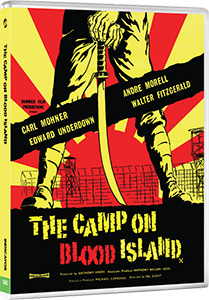 WWII is coming to an end, and deep in Malaya people are being held captive in Blood Island prison camp where the sadistic commandant Yamamitsu (Ronald Radd) has already stated that he will murder everyone if his country suffers defeat.

Sabotaging the camp radio buys them some time, but when an American pilot crashes nearby and is brought into the camp, panic begins that he may well give the game away and let on that the war is over.

British officer Col. Lambert (André Morell) leads the male prisoners, while teaming up with Kate (Barbara Shelley) and the women’s prisoners in arming everyone in an attempted takeover before Yamamitsu can come true on his murderous promise.

The Camp on Blood Island features some harrowing imagery, especially when an emancipated male prisoner is forced to dig his own grave at gunpoint before facing a firing squad.

The female prisoners however, are presented as being a bit more glamorous, and their curvy figures suggest that they were being given the lions share of the camps food supplies.

The stark black and white photography adds an extra layer of bleakness to the proceedings, while the constant threat of violence and an ever ticking countdown to when/if Yamamitsu will hear the news about the war, keeps the tension high.

The short 81 minute running time goes by in a flash and leaves you with sweaty palms and a heartbeat that is definitely raised from when the opening credits began. 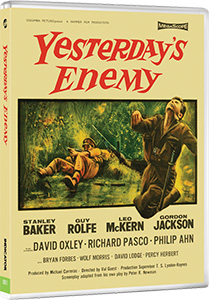 Continuing the WWII theme, Yesterday’s Enemy has Captain Alan Langford (Stanley Baker) leading the remnants of his British Army Brigade through the Burmese jungle after the Japanese invasion.

When the Japanese forces re-take the village, Langford’s ruthless tactics are forced back upon him and his men to extract similar information from them.

I have to admit that Yesterday’s Enemy is my favourite in this box set and I was enthralled throughout its entirety.

Eschewing the slight romanticism that was present in The Camp on Blood Island, this presents a pressure cooker atmosphere which is claustrophobic and unforgiving in the way that characters act and react to their situations.

Despite being filmed entirely on a sound stage, director Val Guest creates a very atmospheric feel of being trapped in a hot and humid jungle.

Almost 60 years after its release, and Yesterday’s Enemy still packs an emotional punch at the fragility of human life and the futility of war. 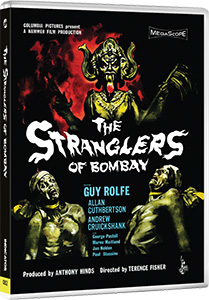 Based on a true story and set in the 1830’s in India, the Thugee Cult of Kali (and yes, this is where the term ‘Thug’ originated) is attacking travellers and stealing their goods.

As more and more people go missing and trade becomes ever more difficult, the British East India Company is forced to act.

Unfortunately they overlook the obvious candidate for the job, and instead send out an upper-class officer who has no real idea of what to effectively do.

The Stranglers of Bombay has an ‘Indiana Jones’ vibe to it, though is slightly let down visually by being one of Hammer’s last movies to be in black and white. The vibrant colours of India would certainly have added another layer to the onscreen action.

The ‘true story’ aspect of its narrative is definitely intriguing, but even without that, The Stranglers of Bombay has enough about it to hold your attention. 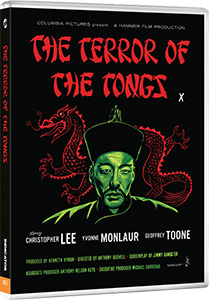 Despite starring Christopher Lee (whom I’ve always admired in every performance that he’s given) in a role that could be described as ‘Fu Manchu-lite’, The Terror of the Tongs is, for me at least, the weakest in this box set.

However, that in no way means that it is a bad film, just that it compared unfavourably to the other 3.

Set in Hong Kong in 1910, Christopher Lee is the leader of The Red Dragon Tong; an organization that used torture and murder to keep the city under its rule.

When a sea Captain’s daughter is murdered, revenge and violence ensue.

Suffering from English actors playing the majority of the ‘Chinese’ characters, The Terror of the Tongs often comes across as an ‘end of pier’ play where people of the correct ethnicity could not be found. Couple this with a budget that is obviously too low for its expectations and a running time that seems stretched even at a moderate 78 minutes, and Terror of the Tongs most definitely suffers against the other movies in this box set.

By no means a classic, but still worth watching.

Overall, Hammer Volume 3: Blood & Terror is yet another stunning Indicator release that should proudly be adorning your shelves. The superlative special features which accompany each of the 4 movies is the icing on what is already a very tasty cinematic cake.

Eat it all up and enjoy.

You can buy Hammer Volume Three: Blood & Terror by clicking HERE. ALL money raised by purchasing from Amazon via our website is given back to our listeners and followers in upcoming competition prizes. The more people buy, the bigger our prizes.