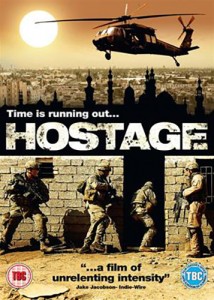 It seems as though the news can not be switched on lately without at least one mention of terrorist activity from within the Middle East. So it seemed only natural that one morning ‘Hostage‘ (AKA ‘Kingdom of Dust’) should drop through the letterbox courtesy of the good people at 101 Films.

Written and directed by Heath Jones (a name I doubt that you’ll be familiar with, though if you are I take my proverbial hat off to you) the movie follows 48 hours in the life of American prisoner Adam as he is used as a propaganda tool by his captors. At the end of the 48 hours they threaten to behead him if the American troops do not withdraw from the area. Will his words go unheeded by the American politicians? Will he keep his head? Will you care?

The entire movie is set within the basement prison room in which Adam is chained, and only a few stock footage shots give the viewer glimpses of the turmoil that is happening in the streets outside. The low budget constraints are visible here within the one set, but much like (the bigger budget) ‘Buried‘ which was predominantly filmed in a far smaller set, the limitations do not hinder the progression of the narrative.

The acting won’t win any awards, but Stephen Hogan as Adam gives a credible performance, with only a cringeworthy monologue to camera during a dream sequence making me squirm in my seat a little. The supporting cast play their parts adequately, and despite the 15 rating there are no real moments of extreme action or bloodshed. There is of course the perpetual menace of Adam being beheaded and his slow descent into panic and his moral quandaries as that time gets closer, which would probably not be suitable for viewers of a younger age.

Despite its low budget, being set in just the one room, and relying for the majority of its running time on the verbal jousting of Adam and his captors, ‘Hostage’ managed to hold my attention throughout. There was the aforementioned ‘dream sequence monologue’ that I found jarred me out of the story, and the soundtrack also grated at times with its heavy-handed emphasis on forcing sentimentality into your ears whenever Adam (or his captors) spoke of family members no longer with them. There is one small action scene at the end involving a fist fight and some gunfire, but the choreography and camerawork make it almost laughable.

‘Hostage’ has a very niche target audience and so don’t go into this expecting ‘The Hurt Locker‘ or ‘Black Hawk Down‘, this is more akin to what you would see on ‘Movies For Men‘ in the middle of the night. If you’ve found yourself enjoying those movies (as have I) then you may well enjoy spending 98 minutes finding out if Adam gets to keep his head or not.

Review by Dave (host of 60 Minutes With) from a DVD kindly supplied by 101 Films.