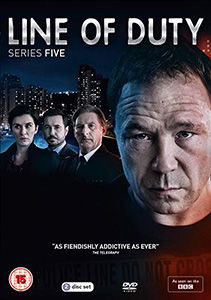 Britain seems to be obsessed with certain BBC drama series: Life on Mars, The Night Manager, Luther to name a few, and of course the amazing Line of Duty, created and still written by Jed Mercurio.

The first series premiered in June 2012 and became quickly became BBC Two’s best-performing drama series in ten years with an audience of of over 4 million viewers. Consecutive series gripped audiences with the ‘big move’ to BBC 1 finally happening for season 4 in  March 2017. The fifth series aired its last episode last night and by all accounts appears to be the most watched TV this year.

Line of Dutyfollows D.S. Steve Arnott (Scottish actor Martin Compston, whose faultless London accent is amazing), who is part of Anti-Corruption Unit 12 (AC-12), he is partnered with D.I. Kate Fleming (Vicky McClure) and they work under the supervision of Superintendent Ted Hastings (Adrian Dunbar). There are so many other characters in Line of Duty that to explain who’s who would take hours…though you could have a read of my series 1-4 review.

That’s the beauty – and possible pain of this series. You cannot go straight into series 5 and hope you’ll work it out. It’s impossible –you must start at the beginning and watch every glorious episode as these 3 police peoples stories intertwine and branch out.

The strength of the series is not just the top-notch acting from all the cast, but the writing. Mercurio treats the audience like it has a brain, and he gallops through the many MANY acronyms of all the different units (I only just worked out OCG means. Organised crime ..group?) at a speedy pace. You don’t get it? Well keep up!

AC-12 investigate cases involving possible corrupt police officers such as D.C.I. Tony Gates (Lennie James), D.I. Lindsay Denton (Keeley Hawes), Sergeant Danny Waldren (Daniel Mays), D.C.I. Roseanne Huntley (Thandie Newton  – who ends up armless), and D.S. John Corbett; the always wonderful Stephen Graham, who is in fact (spoiler!) an undercover officer posing as a top criminal. He’s on a mission to uncover the main guy/girl everyone has been after from the beginning – the elusive ‘H’; a top police officer orchestrating the whole thing.

Series five is as gripping as usual, with the death of PC Manheet Bindra (Maya Sondhi) the net closing in on ‘H’ it appears that Ted Hastings is their man. Episodes 4 and 5 introduce Anna Maxwell Martin as D.C.S. Patricia Carmichael of AC-3 who is gunning to prove Hastings is H, and this gives the end of the series an unexpected boost. Her cool blue eyes staring at Hastings, she has all the evidence –  have they finally got their man?

(spoilers – please don’t read if you don’t want to know!)

Well.
No. There are a lot of red herrings in this series and there was a lot of speculation that H was Gill Biggaloe (Polly Walker) legal advisor and sometime lover of Hastings and finally the mystery would be solved, and for a second it appears she IS, but is in fact just another puppet being controlled by H.

What IS different about the end of this series is a ‘What happened next’ paragraph over each main character, perhaps indicating this will be the end. Luckily for us, series 6 has been commissioned and I think that Line of Duty will continue for perhaps just one more series where we will finally see who H is. I think it’s likely that Patricia Carmichael will be back in series 6.

An absolutely gripping series for grown ups. So for those of you who haven’t seen it yet, go out and buy yourself the box set, or watch on UK Netflix.

I used to live in Los Angeles and write about Rock bands. Now I live in wonderful Wales and write about films. I like video games (especially RDR2) and am also a painter...gratuitous plug: follow my art account on Instagram @artbytinar
Live Event: PLAY Expo Manchester, May 4th – 5th, 2019 Normal Service Resumes May 15th