Has it really been 4 years since my Son and I attended the PLAY Expo in Blackpool!?

With him much taller and myself much greyer, we set of to the Manchester Central Convention Complex for a fun filled day where 8 hours went by in a flash of gaming, laughing, buying merchandise, watching shows, and laughing a lot more.

The expo has everything a gamer needs, no matter what your age. From vintage consoles set up on CRT televisions for the ‘oldies’ (like myself) to relive their youth…only to find that my reaction times have slowed with age, to current-gen consoles loaded with the latest games for you to try.

The above however is only the beginning of what is in store for you when you visit one of the great Expo’s run by Replay Events. 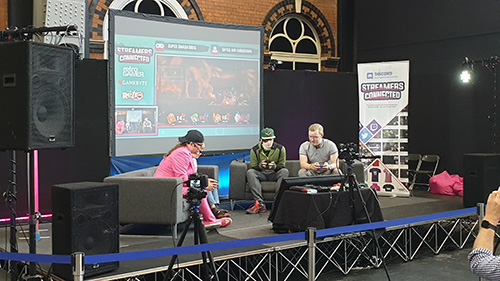 A well laid out floor plan means that you can easily find what you want, be it entering one of the many tournaments that run throughout the weekend, watch talks/Q&A sessions/gaming events at the streaming lounge, immerse yourself in some virtual reality worlds, try an escape room (which sadly we didn’t have time for but is definitely on our ‘to do’ list), watch indie video game developers show their latest projects and try them yourselves, play the many arcade and pinball machines (all on free play), sit down with new board games and chat to the people who designed them, spend as much as you want (actually, make that “as much as you can get away with without your husband/wife/partner developing steam from their ears”) at all the various merchandise stalls, watch live shows/talks/cosplay events at the main stage, and much more.

Now you can see why the 8 hours went by in a flash! It is only through prior commitments that we are not there again today. 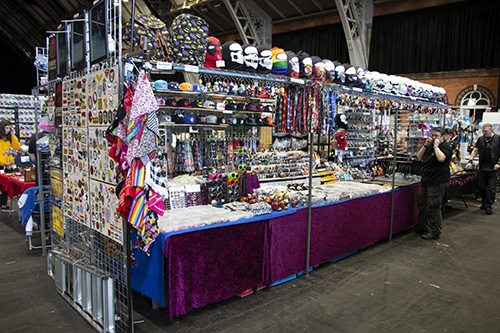 First port of call was a look around the merchandise stalls (which was the 1st of many times we walked around them. Each time spotting something new that tempted our wallets) which boasted an eclectic array of both movie and video game items. Some from abroad, some hand-crafted, some absolutely incredible…I’m looking at YOU Infinity Gauntlet statue with light-up stones.

The stalls catered for all likes and all budgets, with the stall holders always happy to have a chat and help you in any way that they could.

The indie video game zone was filled with new and exciting projects, where not only could you try the games that were in development, but you could also chat to the people involved in making them. All were open to suggestions too and willingly accepted all feedback.

I particularly enjoyed Pacer; a futuristic racer where I hope the ‘hot seat’ mode is added for some couch multiplayer. 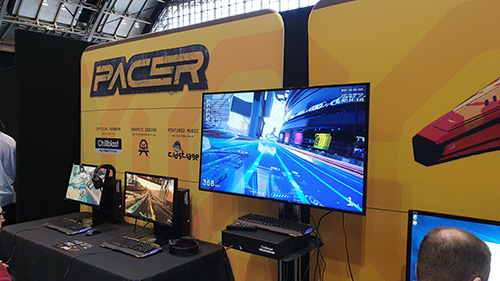 The arcade machines almost had me in tears…especially when I spotted Donkey Kong Jnr. Admittedly not a game that holds much affection for many people, but I fondly remember spending a week in the Isle of Man during the early 1980’s for the TT races, and spent far more of my time there playing this game than watching the races! 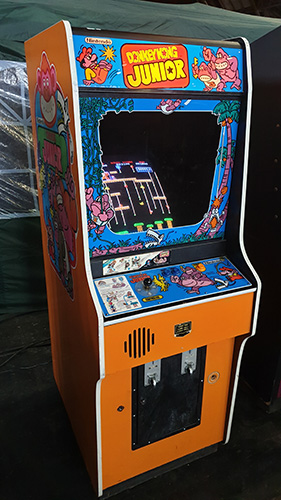 Other personal arcade highlights were Tempest, Galaga, Battlezone, and the sit-down cabinet for Space Harrier…a wonder of graphics and immersiveness when it was released…and still a thrill to play today. 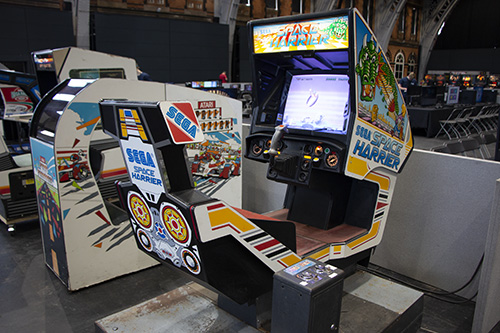 Be still my beating heart though when I entered the pinball section. Is that a Demolition Man pinball table I see before me!?

Regular listeners to our podcasts will know I’m a big Sylvester Stallone fan, so to see (and being able to play) something which I didn’t even know existed almost had the paramedics out to revive me! 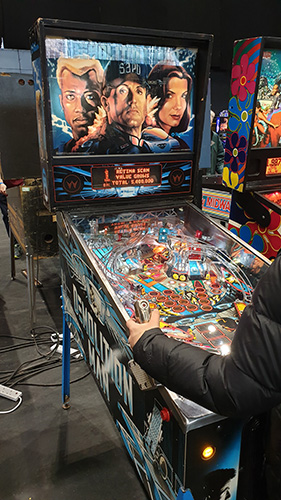 The pinball excitement didn’t end there, as just along from it was a Dirty Harry table with Clint Eastwood’s face peering out and a replica .45 Magnum used to launch the ball! OH.MY.WORD! 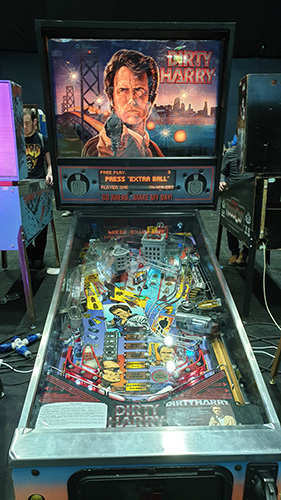 After playing both of those tables it was time to visit the main stage area where we had bought tickets to see John Robertson and his show ‘ The Dark Room’ (reviewed by Chris when he saw the show back in 2015).

Myself and Chris had John on our podcast back in 2016, and so I already knew how funny he was, but this was my (and my son) first time watching The Dark Room…and what a great time we had. 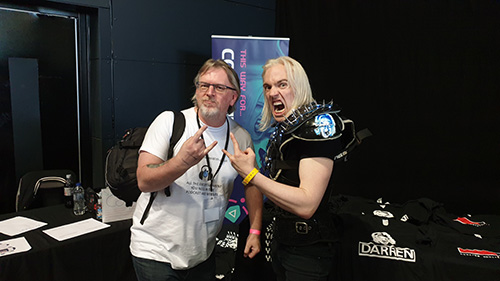 It was also a pleasure to meet John after the show, and I’m pleased to say that we’ll have him back on the podcast soon to chat about….no, I’ll leave that as a secret.

Other familiar faces were in attendance too, and it was an absolute pleasure to meet Hugo Myatt, whose TV show ‘Knightmare’ was essential viewing during its 8 series run from 1987-94…and is still a blast to watch today. 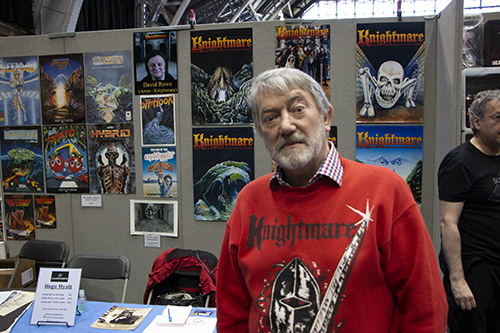 Hopefully we can get him on a show too!

The retro-gaming area was a joy just to walk around and see all the vintage gaming machines from my youth, and it was especially fun for my son and I to sit together and have a competitive session on Pong…a game that I remember playing with my dad all those years ago and which started my love of video games. 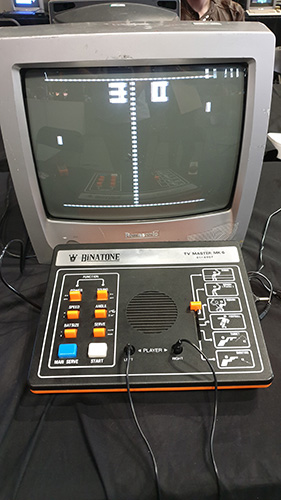 Even though the main attraction for us was video games, there were some great boardgames on display as well.

Two of them particularly caught my eye:

Blockers: a fantastic game where one of the aims is to replicate a colour-coded construction which is shown on the turn of a card. The more complex the construction, the more points you score. But with a set time limit, nerves begin to play a part as time ticks down. Add some friends and a few drinks, and you have a fantastic party game that everyone can pick up immediately and have fun with. It’s definitely one of those ‘just one more go games’, especially when you add in the various game modes that can be applied…even making your own rules! 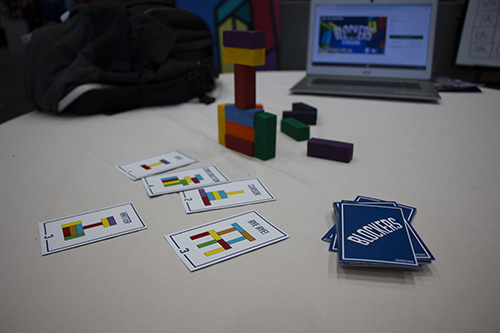 The kickstarter for it is open until May 26th and is well worth supporting:

A card game called Six Gun Showdown caught my eye. A quick fire (pun intended) game where tactics have to be applied to try and gun down your opponent in a shoot-out at high noon…or whatever time you decide to play it.

Another game that is easy to pick up the rules, but has plenty of depth to make for a very interesting experience. Lots of fun and encourages a bit of trash talking too.

Back to entertainment of the pixellated variety and I had an interesting chat with the people from Antstream…retrogaming enthusiasts who are putting together a very interesting project, which is an ‘on the go’ way of playing many gaming classics.

For more information, and to also back this project before its end date of May 10th, please visit their kickstarter page.

Before we knew it the clock ticked over to 6pm and 8 hours of gaming goodness was behind us…but never forgotten.

Replay Events put on video game events across the UK, and as much as they are about rekindling gaming memories from years gone by, they are even more about creating new gaming memories for friends and family to make together.

An absolutely wonderful day with my son that will live with us forever.

Thank you Replay Events, we’re already counting down the days until the next time…I just need to get my ‘twitch gaming’ reaction times honed to try and show him how I was in my prime!

Review by Dave with special thanks to Replay Events for the press passes.