Review: Not Quite Hollywood – The Wild, Untold Story of Ozploitation!

Blu-ray: Not Quite Hollywood -The Wild Untold Story of Ozploitation! (2008) 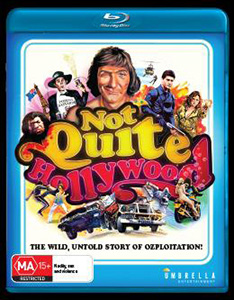 How the hell have I never seen this incredible documentary before!? THANK YOU Umbrella Entertainment for this Blu-ray release. I’m off now to watch more of those 562 minutes of amazing special features.

What? You want to know more? Well okay then, but this whole review could be written in just 3 words: BUY.THIS.IMMEDIATELY.

Not Quite Hollywood -The Wild Untold Story of Ozploitation! is, as you have probably already deduced from the title, the story of Australian exploitation cinema during the 1970’s and 80’s. It’s split into 3 main segments, which basically consist of: sex, horror, and action. All sections have hilarious anecdotes from actors, directors, producers, etc, who were on location at the time, and the clips that accompany their stories will have you making copious notes on all the movie titles so that you can buy them ASAP.

If you have an affinity for the lower budget end of cinema (and if you don’t, you’re missing out on some wildly entertaining stuff) there is cinematic gold on show throughout the entire 99 minute running time. Take a drink of your favourite alcoholic tipple whenever boobs are shown during the 1st segment and you’ll be passed out before the first drop of blood is spilt in the horror section, and don’t forget to dig out those old sock suspenders, as the action scenes (and what goes wrong in them) will blow your socks off if you’re not prepared.

This is one of the most highly entertaining documentaries that I’ve ever seen and ticks every box on the ‘Dave loves this in cinema’ list.

When you’ve finished laughing all all the crazy scenes, hearing the madcap stories, and attempting to keep your socks on, there are over NINE HOURS of special features! Loved the crazy stories and footage of Dennis Hopper in Mad Dog Morgan in the main feature? Then sit back and enjoy the ‘To Shoot a Mad Dog’ documentary. Want more of Quentin Tarantino’s giddy excitement about Brian Trenchard-Smith? Well now you’ve got an interview with them both. Would love some audio commentary by Ozploitation auteurs? Consider that box ticked.

This is a package that HAS to be bought by all lovers of the weird and wonderful world of Ozploitation. Surely my excessive use of capitals in this review has already shown just how excited I am about this Blu-ray!? It’s one of THE most entertaining (and informative) Blu-rays that you could ever hope to buy…so do it…NOW.