This is a spoiler free review. 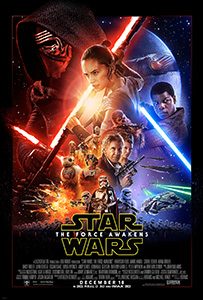 The last time a Star Wars film came out it failed to reignite the fan base as it was over soaked with CGI and told a rather needless and complicated back story. George Lucas’ juggernaught was looking like a victim of its own success. The franchise was living off past glories and the fans were left high and dry.

Star Wars: The Force Awakens was announced back in 2012 after Disney bought Lucasfilm, the internet nearly broke with speculation as to whether or not Lucas would be involved.

The bittersweet ‘good’ news was that Disney would move forward with a new trilogy featuring new writers and directors.

The franchise was passed to ‘Mr safe hands’ J.J. Abrams.; the modern day Spielberg and the man who reinvigorated Star Trek for a new generation. I, for one, was elated at this news and the great news is that HE FUCKING NAILED IT. It’s INCREDIBLE.

Picking up 30 years after Return of the Jedi, we are straight into the thick of the ongoing story as we meet a new character (Poe Dameron) played by one of my personal favourite character actors Oscar Isaac, who over the next 2 hours looks set to become a new trilogy hero and easily the next Han Solo for fans. Poe is the rebellions star pilot and he is on a mission to find a returning character along with his droid BB-8 who again is an instant hit. The way a spherical droid can emote with a turn of his (fully practical) head is revelatory and a wonderful throwback to the magic of the original trilogy. Hot on their trail is ‘The First Order” who has risen out of the ashes of the fallen Empire. Led by a maniacal General Hux (Domhnall Gleeson), The First Order are planet hopping and looking to crush the rebellion once and for all. Spearheading their violent wave of intergalactic terror is new Darth Vader and in my opinion the most brilliantly written and played character in the series; Kylo Ren. The pathos and rage portrayed by indie actor Adam Driver (sure to break into the big time after this) makes Ren as complex and possibly more intriguing as Luke was in the original films. Ren is the crux of the film and every second he is on the screen you get exactly the same feeling as when Dennis Hopper’s Frank Booth in Blue Velvet appeared… violent, unpredictable and absolutely terrifying in his psychosis. I feel a tattoo coming on.

Throw in two fresh faced Brits in the roles of Rey (Daisy Ridley) who aspires to join the rebellion and ditch her life scavenging for food and Finn (John Boyega) who questions his role in the First Order and also wants purpose to his life. These two are brilliant and for Ridley, in her first role, Rey is that rare thing in cinema; a strong female role model. She owns this part. Meanwhile Boyega is lively and genuinely watchable as Finn, obviously aware that he is part of the greatest saga in film history and loving every second. The key as to why The Force Awakens works so well is in its writing and the biggest accolade must go to Lawrence Kasdan who was behind the scripting on The Empire Strikes Back and brings much needed weight to this barnstormer of an action film. Its barrels along at breakneck pace, with Abrams using old school dissolves and screen wipes as well as some really excellent dynamics during the arial fight scenes. Genuinely laugh out loud funny and as dark as a Shakespearian drama, The Force Awakens is not only a wonderful homage to the original trilogy but an excellent addition to the saga…only a few years to wait for EPISODE VIII…it’s going to be just as exciting after this one!

Review by Ramrod (co-host of 60 Minutes With)