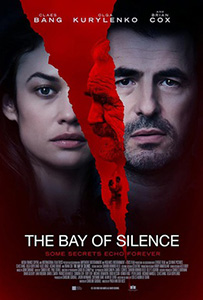 Beginning and ending in the Bay of Silence in Italy, this film (based on Lisa St. Aubin de Terán’s book) is an arthouse chiller/thriller where a husband tries to untangle his schizophrenic wife’s past life.

Starring former Bond girl Olga Kurylenko as Rosalind and Claes Bang (sexiest Dracula ever) as Will, the film opens with a flashback of a young girl hiding a suitcase, we then see the adult couple of Will and Rosalind in the first flush of love on holiday, then fast forward 8 months later to Rosalind with a huge pregnant belly, a new house and the fact that Rosalind already has 2 small twin daughters.

This is similar in tone to Gone Girl and Girl on a Train, both also based on bestselling books, where the story introduces characters, and you’re not really sure who they are or what dastardly deed has happened, all you can do is buckle up and go along for the ride.

Rosalind is convinced that after a fall she prematurely gives birth to 2 babies, not one, as her behaviour becomes more unhinged. Has she got postpartum depression? Or is she pitted against a satanist cult that abducts babies because ….Will seems to be acting a little strangely too.
Alice Kreig as Rosalind’s mum and Brian Cox as art dealer and friend Milton also add to the feeling of secrecy.

When Will returns from a business trip he finds the house empty, Rosalind, baby Amadeo, the twin girls and the baby’s nanny Candy are all gone. This is when the tone of the film really darkens and Bang’s performance becomes one of sincere anguish. If he IS up to no good, then he’s a really good actor.

The story now shifts from the sun of Italy and England to the slate grey of Normandy, where the story and tone of the film takes us down another surprising path. It becomes like a Gothic whodunnit and has one particularly haunting incident that turns the story on its head. This is where the flashback at the beginning gives us some clues as to why Rosalind is drawn to that place, what happened to the young girl in the flashback and … what happened to Candy.

The Bay of Silence is one of those films that you continually try to guess who and why, but… you’re wrong. There are times when you think that you “might” have it worked out, then something happens that has you thinking all over again.

Unsettling, unusual, and with a twisting narrative that will keep you guessing.

The Bay of Silence is released on DVD & Digital HD on September 28th by Signature Entertainment.

I used to live in Los Angeles and write about Rock bands. Now I live in wonderful Wales and write about films. I like video games (especially RDR2) and am also a painter...gratuitous plug: follow my art account on Instagram @artbytinar
Review: Smoove & Turrell – Stratos Bleu Remixes (mixes from Fouk and Rayka) Review: Becky