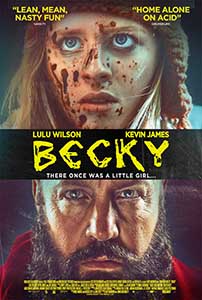 Directed by Jonathan Milott and Cary Murnion, from a screenplay by Nick Morris, Lane Skye and Ruckus Skye. Starring Lulu Wilson as Becky, Joel Mchale as her dad and ‘comedian’ Kevin James as the main bad guy, Becky is a little bit different to most thrillers.

I do try to review films on 60MW without too many spoilers, and unfortunately it’s impossible to discuss this film without giving away a few plot points.

As the title explains this film centres on 13-year-old Becky Hooper and we first see her huge wide baby doll eyes in close up, underlining her young age, as she’s being questioned by the police and giving only vague answers.

I immediately felt an overwhelming dislike of Becky the girl. The most awkward, staring, arsehole of a kid ever put on screen, and even the death of her (fictional) mother didn’t make me warm up to her.  She is stone cold annoying and I felt the urge to “phone fiddle”.

However, as the story progresses (a home invasion) Becky’s rage becomes necessary and seeing her as her true self; an unhinged 13 year old potential serial killing machine, I started to like her.

Of course the story itself is the same old shizz, the bad guys are largely the same old bad guys BUT Lulu as annoying Becky gives it enough of a lift to make it different enough to be interesting. Being 13 isn’t the twist here, it’s her unforgiving brutality, and what’s more, in a by the numbers home invasion film, I found myself believing that Lulu really would stab your eye out while screaming at the top of her voice.

Be prepared for some eye watering scenes as Becky’s rage is unleashed.

Definitely worth a watch.

Becky is released on Digital HD on September 28th.

Review by Tina from a streaming link kindly supplied by Fetch Publicity.

I used to live in Los Angeles and write about Rock bands. Now I live in wonderful Wales and write about films. I like video games (especially RDR2) and am also a painter...gratuitous plug: follow my art account on Instagram @artbytinar
Review: The Bay of Silence Review: A Trip to the Moon