Review: To Live and Die in L.A. 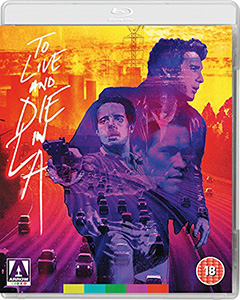 Secret Service agent Richard Chance (William Peterson) vows revenge on the murderer of his partner. Little does he know that his vengeance will lead to him crossing paths with master counterfeiter Eric Masters (Willem Dafoe) in a twisting tale in which nobody can be trusted.

Director William Friedkin constructs a narrative that intertwines the glossy, pastel hued vistas for which the 80’s were renowned, while also underpinning it all with a sense of gravitas and exploding violence that helped to make The French Connection such a success 14 years earlier.

To Live and Die in L.A. is a movie where the protagonist is definitely not the traditional ‘clean cut’ hero. With an adrenaline thrill that is only partially fulfilled by base jumping, Richard Chance spirals down a rabbit hole of drugs, deception and death. Culminating in a ‘do or die’ situation whereby he is persona non grata with both the Secret Service and the counterfeiting underworld.

Featuring a car chase that is the epitome of a ‘white knuckle ride’, To Live and Die in L.A. is a smorgasbord of sudden outbursts of shocking violence, a twisting storyline featuring characters that can never fully be trusted, and cinematography that frames all the action in the sweaty neon underbelly of 1980’s Los Angeles.

To give away any further details of the storyline would spoil the twists and turns crafted by Gerald Petievich; author of the original novel and one of the screenplay writers, along with William Friedkin.

This is definitely a movie that demands your attention as allegiances are swapped, deals are made, and lives are endangered. Don’t be fooled by the Wang Chung soundtrack, this is a gritty drama that is as far removed from its 80’s cop counterparts; Miami Vice, 48 Hours, et al, as you can get. I am SO pleased that the end of the movie was kept and not changed to the watered down atrocity that the studio tried to enforce onto Friedkin and is presented in yet another stunning selection of special features from Arrow Films.

Review by Dave (host of 60 Minutes With) from a disc kindly supplied by Arrow Films.