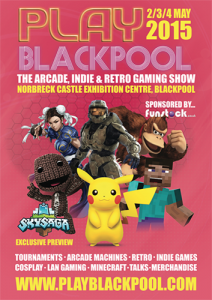 Video games have progressed a hell of a long way since my dad first brought home a ‘Grandstand‘ console back in the mid 1970’s, and over the ensuing 40 years I’ve owned and played the majority of all consoles and computers that have been released here in the UK.

The Play Blackpool event at Norbreck Castle Exhibition Centre was the perfect opportunity for me to relive and replay the many great gaming memories that I have, and so I set off (with my 15 year old retro gaming obsessed Son) armed with tickets for Saturday May 2nd and Sunday May 3rd (the final day is happening as I type this).

The Norbreck Castle hotel is huge, but the event was well signposted and it was easy to find our way to the main exhibition centre. The main hall was a gaming wonderland; filled with multi-coloured lights that were emanating from a huge variety of arcade cabinets, CRT monitors hooked up to a plethora of consoles and computers from across the ages, and all accompanied by the sounds of the machines that were the soundtrack to my youth.

I have to admit that it was all a bit much to take in for a few minutes; so many things to see and play! 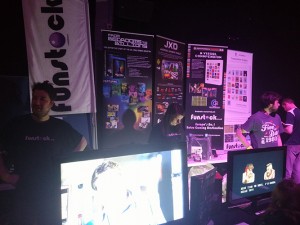 Funstock are the headline sponsor of the event and their stand was the first that I visited (well it WAS right by the entrance!). I had the pleasure of chatting with Andy from Funstock, and when I mentioned my great interest in the Retron 5, his reply to me that there was £20 off it at the event immediately had me reaching for my wallet. You’ll be pleased to hear Andy that it is already under the TV and works like a dream.

We dived into all the arcade machines first and were immediately embroiled in in a Father/Son ‘who can get the highest score’ contest on them. Hunchback, Point Blank, Rally-X, Tempest and MANY more made us laugh as we battled between us (honours were about even at the end of the day incase you were wondering).

Before we started on all of the console and computer games, we made our way to the conservatory area of the hotel that was hosting the first of the days two talks by the Oliver twins.
En route to the conservatory I bumped into Andy again from Funstock who informed me that Anthony and Nicola Caulfield were there. Regular listeners to our podcast will remember that myself and Chris had a great time chatting with them just a couple of months ago and it was an absolute pleasure to meet them and catch up on what they were doing. 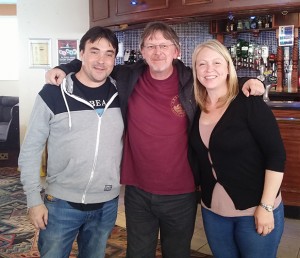 The first of the Oliver twins talks was a retrospective on their amazing career. Everyone was enthralled throughout as Philip and Andrew took us on a fascinating journey through their past, and I could quite happily listen to them talk for hours as they are hugely informative and entertaining. They handed things to the audience to be passed around amongst us; the first computers that they coded on and wonderful hand drawn sketches and diagrams of the early development of some of the Dizzy games (see header photo for one of them). All too quickly the talk was over and we returned to the main hall to seek out some early consoles and computers to continue our high score battle with each other. 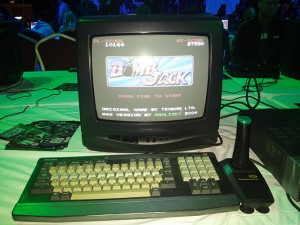 Memory is an amazing thing; I sat in front of so many games that I had previously forgotten about, yet when the game started I was remembering all the tricks and tips to get those high scores…much to my sons chagrin! I can’t remember the last time that I played Bomb Jack, and yet as soon as it began I remembered the exact order to get the bombs, which bombs fuse would ignite next, and how best to clear the bonus stages!

Time was flying by and before we knew it we were back in the conservatory for the 2nd talk by the Oliver twins where they would talk all about their current project: Sky Saga. My son has been an Alpha tester on Sky Saga for a while now and he busting at the seams to hear all the development stories about it, and I must admit that the game peaked my interest too…just a pity it’s not available on Mac yet. Philip kindly gave my son a metal Sky Saga badge and signed (along with Andrew) a Sky Saga bookmark for him (and me too). 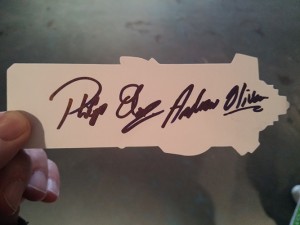 Back to the event hall again and this time we made our way to the block of PS4 machines that were all hooked to large screens. We ignored all the new graphic intense games though and got stuck into some Q*bert and Shovel Knight. All around us was a hive of activity and we were so engrossed in our gaming that we barely registered everything that was happening on the stage in the main hall! We did quickly see part of what looked like a cosplay competition that was happening, but there was so much else for us to see and do that we didn’t get to watch anything else on the stage.

With only 30 minutes to go before the doors closed for the day at 6pm we suddenly noticed a corridor (filled with more gaming machines of course) that led to another room! How had we not noticed this before? How had we walked so close to it so many times previously and not gone down there? That’s testament to how much there is to see and do at the event! 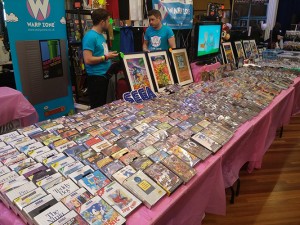 We walked into the other room to be met by an expanse of traders selling retro games, t-shirts, action figures, and even a life-size R2-D2! Needless to say that money was spent in there.

6pm arrived all too quickly and we made our way out and had a 5 minute walk to our hotel. We hadn’t even looked in the room that had board games setup to play. So much still to see and do on the Sunday.

Unfortunately our plans were scuppered as my son became ill and we had to leave for home early on the Sunday. We wanted to play some board games, look longer in the trade room, listen to talks by Jeff Minter and Sumo Digital, and my son was all set to enter the Super Smash Bros competition among many other things. But even though our trip was cut short, we had a FANTASTIC time.

I can heartily recommend the event to everyone with even the smallest interest in video games. It was very well organised and there’s more than enough to see and do to keep you entertained throughout your entire stay. I for one can’t wait to get back to the next one for the full 3 days this time.

Well done to Funstock and Replay Events for helping to create such a great video game event.

Review by Dave (host of 60 Minutes with).