To my knowledge there aren’t many gaming events in the Midlands and I’ve often had to travel far and wide to experience a decent show. As much as I love going to Eurogamer Expo (EGX) to see upcoming video game releases (which coincidentally has moved from London to the NEC in Birmingham), I discovered a show that caters more to my love of retro gaming. I was aware of previous Revival events which have been held in my neck of the woods, but I have never had the opportunity to attend one until now.

This year Revival Solstice (as it was named) took place at the home of Walsall Football Club, Banks’s Stadium. A quick 20 minute trip on the motorway and I was there with parking right next to the venue. I’d read that there would be over 100 consoles and computers to play on, 50 arcades including pinball machines as well as various stalls selling all your retro gaming goodness, but nothing could have prepared me for what turned out to be an amazing day. 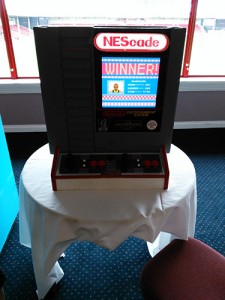 I walked into the room and my inner geek started doing somersaults! What I’d read on paper doesn’t really compare to the reality of being in a room full of like minded people surrounded by retro games. I really was in heaven! There was every conceivable computer and console set up on tables where you could sit down and play. I won’t list them all but trust me that there were consoles and computers that even I hadn’t seen before! I managed to play on a Nintendo Virtual Boy for the first time and I’m pleased to say it didn’t give me a violent headache or make me throw up. I also discovered that there was a TV that had a Super Nintendo built into it meaning you could plug cartridges directly in the top of the TV. It looked so cool and I would have paid silly money to own one had it been on sale! The custom built NEScade was a thing of beauty. Imagine an arcade machine in the shape of a NES cartridge. It really was one of the coolest things I’ve seen as was the Donkey Kong arcade which had been built in the shape of a barrel.

In the centre of the room were arcades that were on free play meaning you could have as many goes as you like without putting in money. 4 player X-Men and Simpsons arcade machines were great fun. Playing 4 player Daytona with authentic steering wheels was an absolute blast. There were also a good amount of pinball machines for everyone to enjoy. A number of consoles had games next to the system and you could swap them as and when you wanted. There wasn’t any security or someone tapping you on the shoulder and that really seemed to be the theme and atmosphere of the event. Everyone was so chilled and friendly that it helped to provide a really relaxing and fun day. All the people I saw seemed to be walking around with massive smiles on their faces and I totally believe that is what makes retro gaming so special. 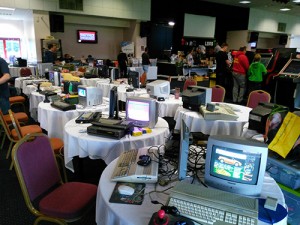 The sound of the games, the wonderful graphics, the controllers, the systems themselves create this seemingly magical feeling. I love modern gaming but I really don’t think you can beat the games that we grew up with. If I’m ever feeling down, I play games that I loved as a child and this years Revival event made me feel like a little kid for the day. There were numerous traders at the event which all seemed reasonably priced. I came back £50 lighter buying some Sega Saturn and Sega Dreamcast goodies.

The venue itself was fantastic with plenty of room to move around, look at the stalls and play the numerous consoles and arcades that were there. My only gripe is that there wasn’t any signposting for the show and I had to be pointed in the right direction by a local market trader who happened to be outside.

I absolutely loved attending Revival! The games, consoles, computers and especially the atmosphere were all perfect and I will definitely be going again. Hats off to the organisers because they really did a fantastic job. You can tell that they put their heart and soul into the event with their love of gaming being a priority. It was a fantastic day and I’m now really lucky to have two superb gaming events right on my doorstep!

I love video games and movies as much as I love my children. However, I'd rather face off against the worst end of level boss, and watch the scariest horror movie than visit another soft play! Thanks for taking the time to visit the website and read this review. Please send any complaints to Dave and any money to me!
Review: The Count Yorga Collection Review: Microwave Massacre