Let me begin by apologising for the delay in getting this review online; my original draft of it was lost in what I’ve now called “the great hard drive crash of 2016“, something which I’m sure everyone reading this would have suffered at some point and can relate to. However, with new external HDD now sat next to me, I can reiterate what was in my original review.

Running from September 26th – 28th at the Manchester Metropolitan University Student Complex, the Starburst Film Festival was THE place to be for cinephiles. Encompassing the whole of the MMU Student Complex, each floor was packed with screenings, guest speakers, merchandise, activities and fellow lovers of film who were always ready to stop and have a chat. This is definitely the most welcoming festival that I’ve attended, and despite only being there for the Saturday (something which I hope to rectify next time) and all by myself, I was soon chatting with actors, directors, producers, authors, and Caroline Munro (more on that later).

There are so many fantastic screenings and Q&A’s happening throughout each day that time flies by in a whirlwind of amazing movies and fascinating talks. My day began at 10am with a screening of The Golden Voyage of Sinbad, remastered in HD from the original camera negative and looking like it was filmed yesterday. A favourite of mine since first watching it as a kid back in the 70’s, it was an absolute treat to watch it again with such vibrant colours and pin sharp picture. When the movie ended the experience ramped up another notch as Caroline Munro took her place in front of the gathered throng for a chat about her experience on set of the movie and also a Q&A session. Accompanying her at one point were John Walsh and Connor Heaney who are from The Ray and Diana Harryhausen Foundation and had brought with them some of the stop-motion models used in The Golden Voyage of Sinbad. 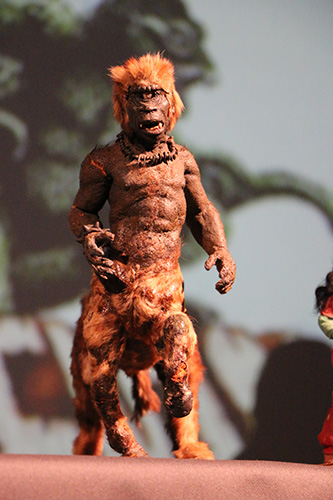 This segued perfectly into the next tick that I had made on my timetable; a talk by John Walsh all about The Ray and Diana Harryhausen Foundation. Not only is John articulate, knowledgable, entertaining and passionate about what he does, he also posses a voice that you could listen to for hours. His background is fascinating and the way in which he first met Ray Harryhausen is a superb story in itself. We were treated to John’s student film from the late 1980’s which focused on the work of Ray Harryhausen, before Connor Heaney (collections manager for the foundation) joined him onstage with the models from The Golden Voyage of Sinbad, plus some others too. As someone who grew up fascinated by the movies which featured Harryhausen’s work (plus owning them all on DVD) it was an absolute pleasure to hear all the stories that were being told. John and Connor were then joined onstage by Caroline Munro and Martine Beswick for a chat about working on movies where Ray was involved and finishing of course with the chance for those of us in the audience to ask some questions. I am currently chatting with John and arranging for him to come on an interview show with me, so keep watching our social media for an announcement. Also make sure to subscribe to the Ray Harryhausen podcast in which John and Connor tell fascinating stories about the life and career of Ray, as well as being joined by some very special guests. 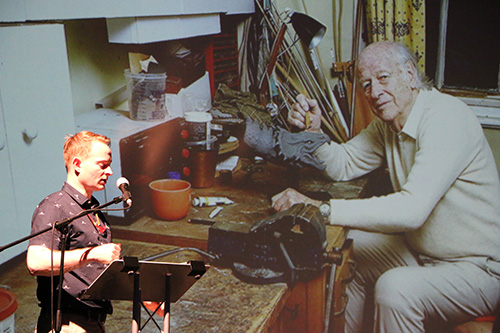 Already into the afternoon and not being able to stay until the final events of the evening, I was already regretting only being able to make it for just the one day. This is an event that has so much fascinating stuff constantly going on that it should definitely be savoured over the entire weekend. However, I still had time to check out what was happening across all the floors of the building, and upon leaving the Ray Harryhausen event I was met face to knee with Lady Penelope and Scott Tracy from Thunderbirds! The puppets were there for a screening of the show that was due to begin soon. Hitting UK television screens in 1965 (the year I was born) Thunderbirds was a big part of my childhood and I had a huge smile on my face as I took some photographs of these 2 iconic characters from the stable of Gerry and Sylvia Anderson. 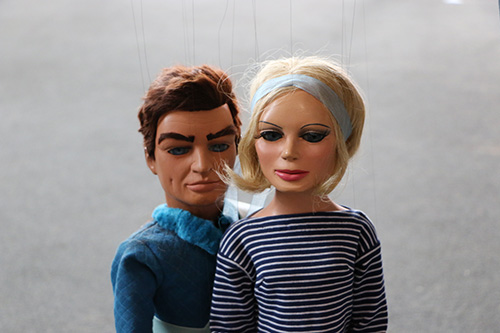 Making my way through the lobby on the ground floor I suddenly realised that there seemed to be an inordinate amount of lycra appearing on people! I’d either time travelled back to the 80’s (which would have been fitting seeing as Katy Manning was in attendance that day for a Dr Who screening) or there was something to do with wrestling going on. Sure enough it was the latter and the folks from Futureshock Wrestling were showing off their title belts and had a table full of merchandise to help promote themselves. Admittedly I’m no fan of wrestling, but 60 Minutes With always likes to promote local bands, artists, businesses, etc. So please visit their website and check out when they could be in your area.

Those that know me will attest to my devotion of Caroline Munro. In 1976 my Dad took me to the cinema (as he often did, and I have him to thank for my passion of film) to watch At The Earth’s Core. I still remember walking out after that screening with my heart all a flutter. Caroline was my first (and deepest) cinematic crush. Here I was 40 years later, already having seen her at 2 Q&A sessions but I was now making my way to the 1st floor where she would be signing photo’s. I had brought with me the DVD cover for At The Earth’s Core and had already got in mind how I would love her to sign it. Would she do that? Would she be chatty? Maybe she wouldn’t sign personal stuff and only her photographs? I’ve met ‘heroes’ of mine before and most have been fantastic, but it is always shattering when on the odd occasion your pre-conceived thoughts about them are dashed when they will barely look you in the eye and converse in only the occasional grunt to move you on quickly so that the next person in the conveyer belt can buy a photo. Please don’t let her be like that! 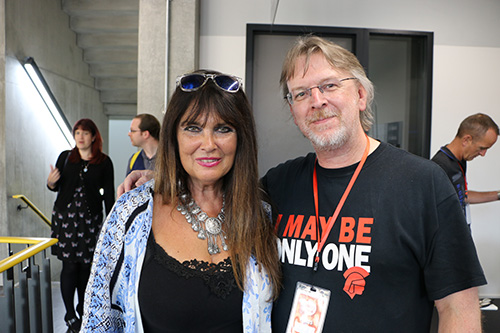 I needn’t have worried. Caroline was wonderful. With a warm friendly greeting she immediately made me feel at ease and we got chatting. She told me about her experience of working on At The Earth’s Core and a couple of stories about Doug McClure and Peter Cushing. I asked if she would sign my DVD cover and she was delighted to, even more so when I coyly asked her if she would sign it with the inscription that I’d wanted for years. With a smile on her face she got out her marker pen and scribbled away. I am now the proud owner of At The Earth’s Core on DVD which is signed; “To Dave, with love from your first cinema crush, Caroline Munro, as Princess Dia“. She then posed for numerous photos with me and left me feeling like that 11 year old kid again. Thank you Caroline.

Sat next to her was Martine Beswick; Bond girl in both From Russia With Love and Thunderball, battling Harryhausen dinosaurs and Raquel Welch in One Million Years B.C.,but it is her role in Hammer Films Dr Jekyll & Sister Hyde that is my favourite. I was delighted that a photograph of her stood next to Ralph Bates in that movie was on the desk in front of her and it is now on the wall in front of me as I type this. Thank you too Martine. 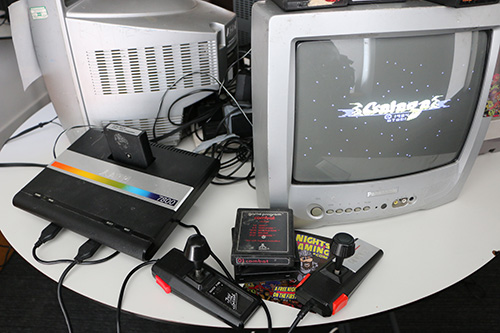 On a high from all of that, I was quickly running out of time before I had to leave and I was dashing from one floor to the other trying to see as much as possible. Retro gaming caught my attention and it is always good to see vintage machines being played by a generation for whom HD gaming in surround sound is standard for them. Hunched around portable CRT sets and staring at blocky pixels with a colour palette barely into double figures, much laughter and screams of delight and frustration were heard.

Authors with their latest work were scattered throughout and I was given one of the latest Dr Who Lethbridge-Stewart books. Grasping this firmly in hand I bumped into an actor who was promoting a movie in which he had just starred (keep an eye on our site for an upcoming review on it) and then immediately got in a conversation with 2 producers who were telling me all about their upcoming horror project. This was an ongoing theme throughout my time at the Starburst Film Festival; a succession of informative and friendly chats with people whom I had never met before. With all of the above (and more) fitted into just over half of the day (Saturday’s events carried on until midnight) this is a festival where you definitely get value for money and will never be bored. I’m already looking forward to spending the full weekend there next time and hopefully I’ll see you there too. Tell your friends!

Review by Dave (host of 60 Minutes With) with thanks to the Starburst Film Festival for the press pass. 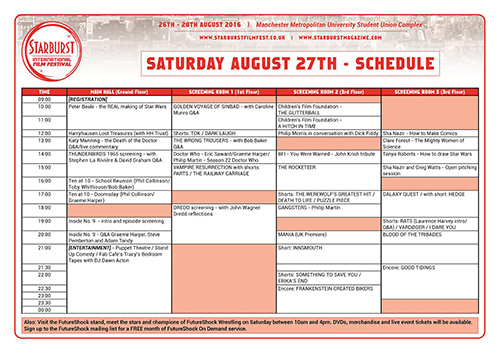