Probably not the best 2 words to begin a review…especially a review based on an incredible live event held in a church!

However, those were the words that immediately fell from my mouth when I discovered a few weeks ago that Uli Jon Roth was playing a special one of a kind charity event just 20 minutes down the road from me. 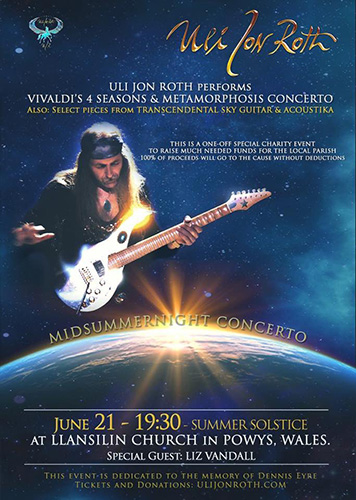 The event was to raise funds for St Silin’s church, Llansilin. A beautiful parish church, which has parts dating back to the 13thcentury and is a Grade 1 listed building.

The story of the inception of the event is almost as entertaining as the midsummer night musical treat that 200 people were lucky enough to witness.

A local parishioner got talking to Uli in the village and asked what he did for a living (oblivious to the fact of who he was!). He replied that he was a musician, and so the parishioner asked if he’d like to play a fundraising event in the church.

Uli very kindly replied that he would!

Now just take a second to ponder on that…

Somebody inadvertently bumps into Uli Jon Roth (a world famous guitar virtuoso and a man I’ve been a fan of for 40 years), doesn’t recognise him, finds out that “he’s a musician”, asks if he’ll do a charity fundraising gig for the local church, and he agrees!

Something that could indeed be read as “God works in mysterious ways”. 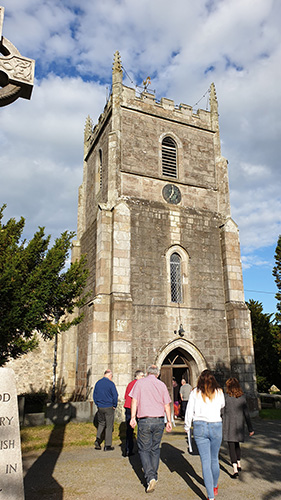 The 200 tickets for the event of course sold out, with local parishioners sat amongst fans of Uli that had travelled from all ends of the country to witness this unique event, and of course to help with the upkeep of Llansilin’s historic church.

Beginning at 7:30pm on midsummers evening, the next 105 minutes were an audio and visual treat, the likes of which can not be compared to anything I’ve ever seen or heard before.

Uli, accompanied with a selection of his incredible electric guitars, stood at the front of the church with candlelight either side and above him, and also backlit by the stunning stained glass windows…a simple setup, yet more beautiful than any arena stage show I’ve seen.

There was a rear projection screen behind and to one side of Uli, which showed a variety of images and video as he played, but to be perfectly honest I gave it no more than a cursory glance all evening, as Uli held my full attention with his mesmerising guitar playing.

Uli doesn’t just play the guitar though, he almost becomes one with it. Producing not just music, but a plethora of emotions that float in the air…heightened all the more by the setting that we were in.

Renditions of classical pieces was followed by an incredible improvisation session on an 8 string guitar, producing from thin air a superb flow of music which he called “The Road To Llansilin”. A one off piece of music, at a one off event…one of those little pieces of magic that 200 people will keep with them forever. 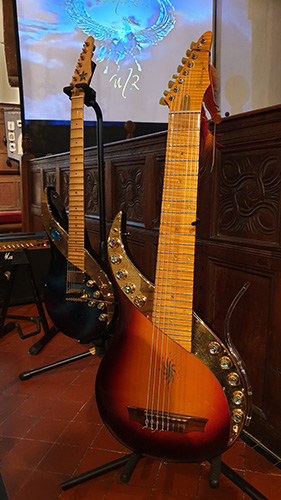 After another beautiful instrumental on the 8 string guitar, it was time for the ‘main event’ of the evening: a rendition of Vivaldi Four Seasons and Metamorphosis Concerto.

Much like Uli has more strings on his guitars, I swear that he must also have more fingers too! His hands become a blur and sounds come from the speakers that surely one man alone could not make? But he does. 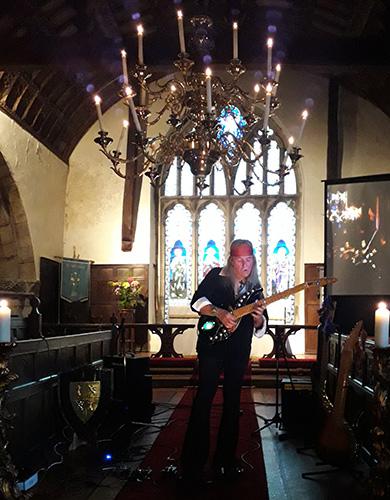 Exhilarating, captivating, uplifting…so many words could be used to describe how it was to be sat in St Silin’s church as Uli coaxed wave after wave of musical energy over those that were in attendance.

All was still not over though, as Liz Vandall joined him at the front of the church and stepped up to the microphone for a rendition of  Bridge to Heaven.

A standing ovation was a well deserved end to 105 minutes of musical magic.

The evening was still not over though and there was an opportunity to have a ‘meet and greet’ with Uli in one of the side rooms at the church, with all donations for this once again going to the fundraising.

Uli was exceedingly gracious with his time for everyone, even going so far as to play guitar and chat with a young lad who had brought his guitar with him.

Myself and Tina were thrilled to meet him. The photos we had with him (and with Liz) will be treasured forever, as will the event poster they both signed for us too. 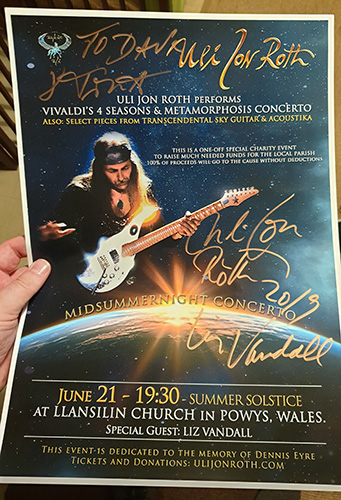 With the village pub being next door to the church, we called in for a quick refreshment before the drive home…only to see Uli walk in for a drink not far behind us!

A perfect end to a perfect evening.

Uli’s fundraising page is open until  June 30th , so if you read this before then, please either donate or share the link to help raise awareness: https://www.justgiving.com/crowdfunding/ulijonroth-midsummerconcerto

With Uli 20 minutes down the road from me, wouldn’t it be an absolute pleasure to record a Soundcheck interview show with him!?